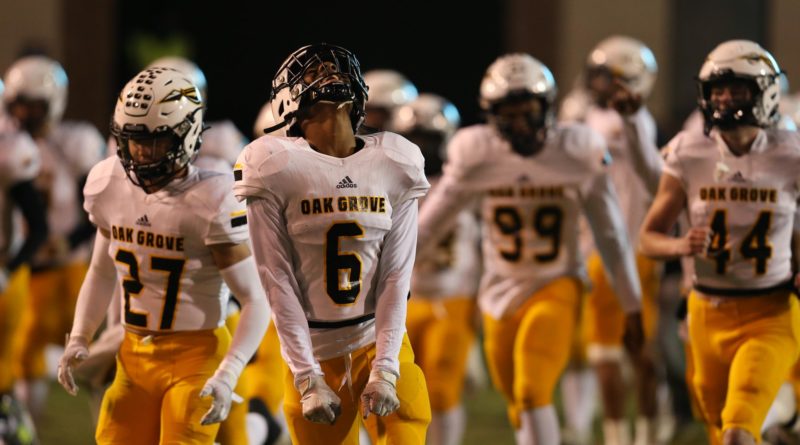 We’re down to four teams left in each classification of Mississippi High School football, and we’ve got two of the very best games of the season set for this weekend in Class 6A.

In the North, Madison Central is trying to get over the hump against a potent Starkville team. In the South, the defending state champs are headed to Brandon for a second shot at Sam Williams’ up-start Bulldogs.

Here’s a look at both games set for Friday night, and what to expect in each of them.

If the North Championship mirrors the first meeting between these two teams back on Sept. 24., we’re in for another great ball game. Starkville won that first meeting 42-35 after erasing a 21-7 halftime deficit with a 28-point outburst in the second half from quarterback Trey Petty and that high-octane Starkville offense.

Madison Central has won every game since, and by wide margins. The 31-21 win over Oxford last weekend was Jaguars’ first margin of victory that was closer than 17 points since the start of October.

In that 10-point win over Oxford, Madison Central was without starting quarterback Vic Sutton, who went down with a lower leg injury and did not return. Sutton remains week-to-week with the injury and his status for Friday’s North State game is still questionable at best.

Backup quarterback Jake Norris played well in Sutton’s absence last week, hitting a couple of key passes late to preserve the lead, then popping a long run to give the Jaguars’ the two-score lead late in the game.

The team’s leading rusher Robert Dumas Jr. is done for the year with an ACL injury. He had rushed for 1,011 yards and a team-high 21 touchdowns before suffering the injury two weeks ago against Desoto Central. In his stead, the Jags have turned to De’Andre Pullen (102 carries, 801 yards, 13 TDs) and Connor Brown (50 carries, 188 yards, 1 TD) to carry the bulk of the load.

“If we end up going with Jake at quarterback, we’re not going to ask him to perform some Herculean task,” Madison Central coach Toby Collums said. “We’re going to put the ball in our playmakers’ hands and we’re not going to get away from what got us here.”

Starkville comes in riding a five-game winning streak. Their last loss came at Oxford on Oct. 22 when the Chargers beat them 42-35 in a shootout. The Jackets whipped Hernando 63-21 in the opening round, then beat Southaven 41-27 in the second.

Starkville was not supposed to be in this position this year. They had to replace the state’s highest-rated quarterback prospect and feature a defense that has given up three or more touchdowns in eight out of 13 games.

But the rise of sophomore quarterback Trey Petty has accelerated the rebuilding process and given Starkville a spark. They have averaged 39.5 points a game on offense since the start of October.

“It’s moved up our time table big time,” Jones said. “Honestly, midway through the season, we started district play and he won a bunch of those games by putting the team on his shoulders. The Madison Central game and the Clinton game in particular. We needed that, and any time you have a guy playing at that high level at such a young age, it’s exciting.”

The game within the game this week will be the Starkville front seven against Madison Central’s potent running game. If the Jackets can control the line and slow down the Jaguars’ rushers, they’ll be in good shape. If Madison Central finds running room between the tackles, it’ll open up the rest of the offense.

The 6A South Championship is another rematch from a very good regular-season game. The Bulldogs nipped the Warriors 24-17 a month ago (on Oct. 22) but a lot has changed since then.

In that first meeting, the defending Class 6A Champion Warriors had no answer for Brandon tailback Nate Blount. The 230-pound sophomore tailback dominated the game by rushing 36 times for 260 yards and a touchdown.

But Blount’s out now with a broken collarbone, so Brandon coach Sam Williams has to find a new way to beat the surging Grovers.

Brandon junior Jarvis Durr (155 carries, 842 yards, 13 TDs) will handle the bulk of the carries in the ground game. Quarterback Landon Varnes is coming off one of his best games in a win over Warren Central, and he’s got a couple of good receivers in David Thigpen and Lester Miller, who have combined for 77 catches for 1,363 yards and 15 touchdowns.

They’re likely to need another big game if the Bulldogs are going to beat the Warriors, who appear to be peaking at the right time for the second year in a row.

Oak Grove had stretches earlier this year where they didn’t look like a team ready to repeat as Class 6A Champions, but that has changed dramatically the past two weeks.

The Warriors brow-beat Gulfport 33-7 two weeks ago, then erased a 21-14 halftime deficit to knock off previously-unbeaten Ocean Springs 28-21 last Friday night. Quarterback Kabe Barnett has played better, but the biggest difference has been the Warriors’ offensive line, which paved the way for 360 rushing yards against the Greyhounds last week.

“I think the big thing for us is that we’re finally healthy,” Oak Grove coach Drew Causey said. “(Tailback) Dontavious (Howard) missed a couple of weeks with a hamstring and Klabron Pollard, one of our best offensive linemen, missed that first Brandon game completely. We didn’t have a very good week of preparation and it carried over into the game. But you can tell a difference in our guys since the playoffs started. They seem to be locked in right now.”

Dontavious Howard and JQ Gray could present all kinds of problems for Brandon’s vaunted front seven, but nobody has been able to get Brandon’s goat running the ball since Madison Central in Week 2. The game may ultimately come down to which quarterback makes better decisions and does a better job of protecting the football.