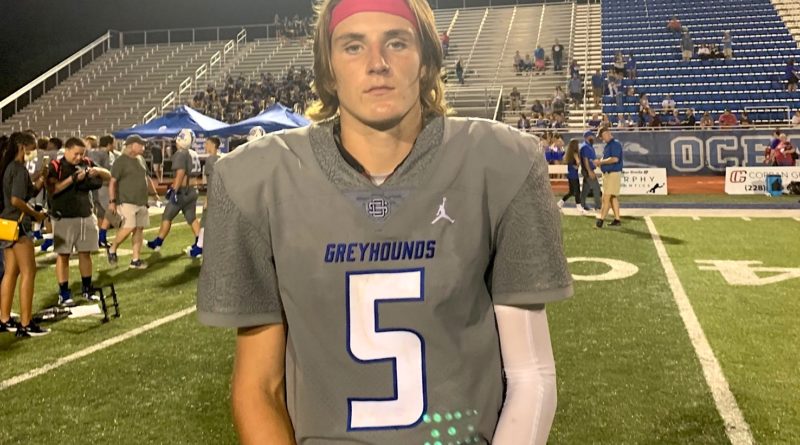 “Bray is a tremendous athlete,” Ocean Springs coach Blake Pennock said. “But what makes him so special is his ability to read defenses and distribute the ball where it needs to go. He’s a dual threat, which produces problems for opposing defenses, but then he can also get the ball anywhere on the field, which makes our offense incredibly difficult to defend.”

The junior is currently committed to play baseball at Southern Miss, but Pennock said he undoubtedly believes his star quarterback will also play football at the next level.

“I know Southern Miss is hoping to keep him,” he said. “Because Bray is going to be a star wherever he goes.”

Perhaps no defender has had as big an impact on their team’s season than Lafayette’s Derrick Burgess. In 12 games, Burgess recorded 108 tackles, including 80 solo stops, and made 38 tackles behind the line. That number includes 16 sacks, and if that wasn’t enough, the big fella has also recorded one interception, recovered one fumble and blocked a punt.

“The tangibles are there,” Lafayette coach Michael Fair said. “He’s athletic, strong and runs well for a kid of his size. What separates him is his motor and his desire to make the play. I don’t know that I’ve ever coached a guy who works harder, and that translates onto the field on Friday nights.”

Burgess is rated as a two-star prospect by recruiting service 247sports.com, and reportedly holds an offer from Southern Miss.

There’s nothing we could say about Columbia’s all-everything senior defensive lineman that would convince anyone of his talent more than five minutes of game film. The big 6-foot-4, 370-pound monster has accounted for 55 tackles this year, including 22 for a loss, and five sacks.

He’s crazy athletic for a guy his size, rated as a four-star prospect by 247sports.com and currently committed to play his college ball for coach Nick Saban at Alabama.

There are guys who mean a lot to their team, and then there’s Malcolm Hartzog at Jeff Davis County. He does a little bit of everything for the Jaguars, but here are the highlights: Hartzog has rushed for 1,231 yards and 28 touchdowns, caught seven passes for 163 yards and three scores, returned five punts and six kickoffs for touchdowns, recorded 23 tackles on defense (including seven for a loss), picked off three passes and returned one fumble for a touchdown.

“The thing about Malcolm is that he’s always been such a competitor,” Jeff Davis coach Lance Mancuso said. “Whether it’s on the field or off the field. He’s one of those guys that has never settled for where he was at. A lot of times, young guys coming up, they rely on the talent they already have, but he continued to take it to another level every year.”

Hartzog is a big reason why the Jags are still playing in the 3A playoffs. He has not announced where he will play his college ball. He reportedly holds offers from Ole Miss, Southern Miss and South Alabama.

East Webster’s do-it-all linebacker and tailback is more than deserving of this honor. He’s been a one-man wrecking crew for the Wolverines, racking up 132 tackles (including 72 solo stops), seven sacks and two forced fumbles. He’s also rushed 106 times for 790 yards with 10 touchdowns.

He’s rated as a three-star prospect by recruiting service 247sports.com and currently committed to the University of Louisiana at Lafayette.

Nobody has figured out how to stop Vontrez Rush, and watching 20 seconds of film, it’s easy to see why. Rush has led Simmons with 1,615 yards on 116 carries with 26 touchdowns and caught 27 passes for 331 yards and four more scores. On defense, he’s recorded four pass breakups and two interceptions.

“His work ethic is what stands out to me,” Simmons coach Tavares Johnson said. “If you got three words out of him, you would have gotten one more out of him than I ever have, but his play on the field doesn’t match his demeanor. He works extremely hard, and he’s just as dedicated off the field as he is on the field.”

Johnson said college programs have been sleeping on Rush because he comes from a 1A school, but added that if a mad scientist was designing a tailback, he’d come out looking like Simmons’ splendid senior.