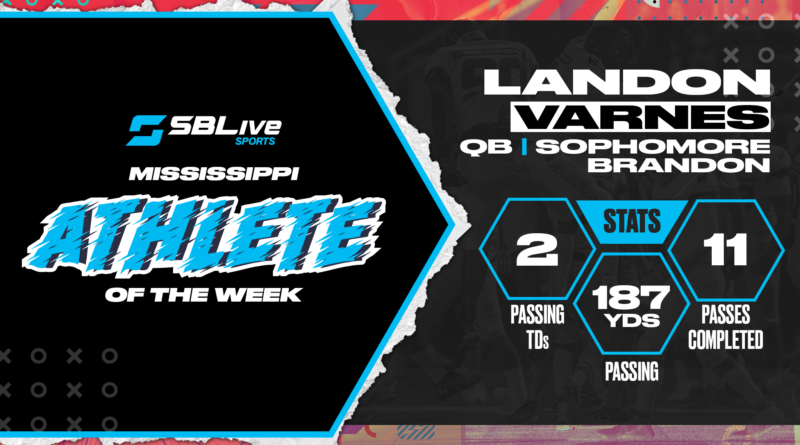 Congratulations to Brandon quarterback Landon Varnes for being voted SBLive’s Mississippi High School Athlete of the Week for Nov. 1-7!

Varnes received 51.78% of the vote, beating out Enterprise’s Maddox Moore who finished second with 20.97%. Kossuth’s Jack Johnson finished third with 18.15% and Morton’s Robert Jennings finished fourth with 2.3%. There were over 44,000 votes tallied this week!

Sanderson had 21 points and added seven rebounds in a 65-34 win over New Site.

McElwain won the Class 2A Boys Cross Country state individual title with a time of 17:06.29.

McCarley won the Class 2A Girls Cross Country state individual title with a time of 20:00.55.

Moore scored the first ever goal for the Enterprise boys varsity soccer team (in their first official game of the season), had multiple assists, and scored a total of 2 goals in the game contributing to a win of 8-1 vs. Quitman.

Rushed for 48 yards on 14 carries, but score four touchdowns — including two in overtime — in a 35-34 win over Gentry.

Rushed for 135 yards and four touchdowns in a 48-7 win over Oxford.

Rushed for 163 yards and three touchdowns on 13 carries in the first two quarters of a 54-6 win over Mantachie.

Rushed for 145 yards and two touchdowns and tossed a 71-yard touchdown pass in a 42-31 win over St. Stanislaus.

Racked up 173 yards of offense, scored three touchdowns and threw for another in a 32-7 win over Nettleton.

Rushed for 144 yards and two touchdowns on six carries in a 40-0 win over Northeast Jones.