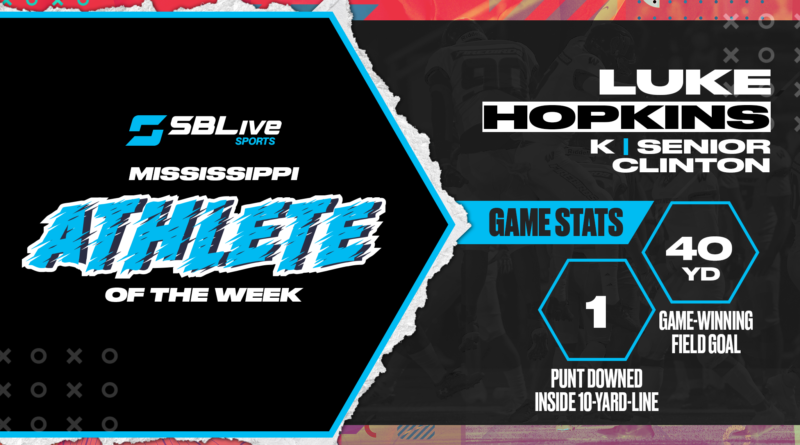 Congratulations to Clinton kicker Luke Hopkins for being voted SBLive’s Mississippi High School Athlete of the Week for Oct. 25-31!

The senior booted his final punt 50 yards to pin Tupelo at its own seven-yard line, then drilled a 40-yard field goal as time expired in a 17-14 win over the Golden Wave.

Hopkins received 37.11% of the vote, beating out Scott Central’s Quez Goss who finished second with 31.15%. St. Martin’s Gavin Allen finished third with 7.57% and Morton’s Robert Jennings finished fourth with 6.88%. There were over 76,000 votes tallied this week!

Jaylen Aborom, Oak Grove: Caught four passes for 107 yards and two touchdowns and intercepted on pass on defense in a 36-25 win over Pearl.

Nate Blount, Brandon: Rushed for 263 yards and six touchdowns on 34 carries in a 50-48 win over Northwest Rankin.

Charleston French, Amory: Rushed 23 times for 200 yards and three touchdowns in a 46-14 win over Nettleton.

Quez Goss, Scott Central: Completed 14 of 22 passes for 208 yards and three touchdowns and rushed nine times for 79 yards in a 33-20 win over Velma Jackson.

Bray Hubbard, Ocean Springs: Rushed for 113 yards and two touchdowns and passed for 79 yards and two more scores in a 46-14 win over Gulfport.

Robert Jennings, Morton: Rushed for 106 yards and two touchdowns on 17 carries in a 25-14 win over Union.

Red Parker, Houston: Rushed for 262 yards and three touchdowns on 12 carries in a 51-15 win over New Albany.

Emmanuel Randle, Tupelo Christian: Rushed for 122 yards and two touchdowns on 18 carries in a 45-0 win over Smithville.

Tavares Wade, Hattiesburg: Rushed for 101 yards and three touchdowns on 20 carries and completed 7 of his 11 passes for 71 yards in a 20-17 win over West Jones.

Jaylen Washington, Houston: Rushed for 378 yards and four touchdowns on 20 carries in a 51-15 win over New Albany.

Trikyus Woodall, Lafayette: Rushed for four touchdowns in a 49-8 win over Greenville.

Jerell Boyd, Holmes County Central: Boyd rushed for 256 yards and three touchdowns on 21 carries in a 56-51 win over Ridgeland.

Dandreyus Giles, Holmes County Central: Giles rushed for 192 yards and three touchdowns on 14 carries along with a pick six (60 yard touchdown) in 56-51 win over Ridgeland.

Donavin Green, Yazoo County: Green was a jack-of-all-trades on the field, running 12 times for 140 yards and three touchdowns, and going 2-for-5 passing with 24 yards. Also tallied one interception, two solo tackles and two assists on defense. His biggest plays were a 21-yard pass and a 45-yard run.

Marcus Jones, Ethel: Performed on both sides of the ball with 24 carries for 145 yards on the ground and 3-of-5 passing for 46 yards and a touchdown. Added four tackles and an interception on defense in a 28-14 win over Vardaman.

Jacoby McQuiller, West Point: Was a force on defense tallying one interception, one sack, one forced fumble, and five tackles.

Tralyn Oliver, Olive Branch: Ran for 305 yards, which broke an Olive Branch single-game record that had stood since 1978. He now has three of the top 10 rushing performances in Olive Branch history.

DJ Burgess, Lafayette: Dominated defensively in one half of play with one sack and one forced fumble to go along with nine total tackles, four of which were tackles-for-loss.

Hunter Parker, Vancleave: Threw for 131 yards worth of passing touchdowns alone on four scores that went for 19, 31, 51 and 30 yards.

Gavin Allen, St. Martin: Was a force on defense recording five solo tackles and seven assists and one forced fumble.

Briley Ross, Lewisburg Girls Soccer: Ross scored the 2 goals for the Patriots in their match against Germantown on Saturday.