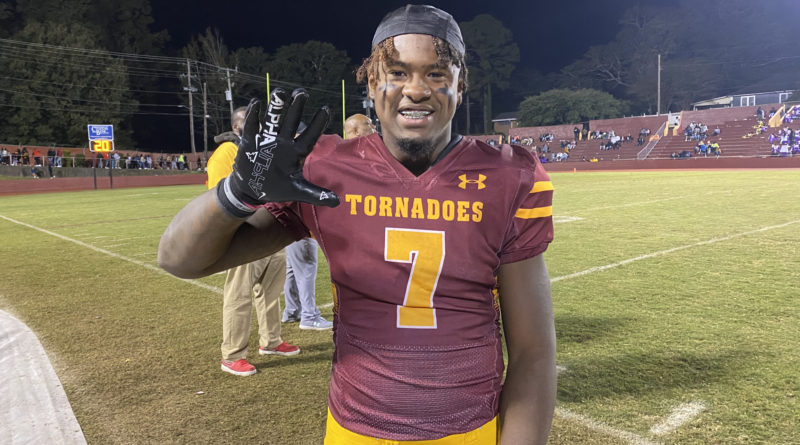 LAUREL – As the final seconds of the game ran out, the Laurel bench began the call.

Minutes later, the best-known trophy in Mississippi high school football was back in Laurel’s hands following a 50-0 thrashing of Hattiesburg in the 100th annual Battle for the Little Brown Jug Saturday night at Watkins Field.

The Tornadoes will be the third seed in the region and will travel to face George County in the opening round of the Class 5A playoffs next week. Hattiesburg, the No. 4 seed, will open the playoffs next week at Picayune.

“Nobody wants to play us right now,” said senior running back Kiron Benjamin. “We’ve got all the momentum and we’re ready for anybody.”

No doubt about that. The Tornadoes head for the postseason with a full head of steam after dominating the Tigers in every phase of the game. It was the largest margin of victory by either team in the series, surpassing Laurel’s 50-8 win in 1950.

“We put a complete game together for the first time all year,” said Earnest. “

For Hattiesburg, the bad started early, as Laurel scored touchdowns on its first three possessions and completely smothered the Tigers defensively.

Hattiesburg made a gamble pay off initially, recovering an onside kick to open the game, but that was about the only thing that went right for the Tigers.

“Hats off to Coach Earnest, his coaching staff and his team,” said Hattiesburg coach Tony Vance. “They came out and were the better football team tonight.”

On their first play from scrimmage, junior quarterback Tavares Wade was dropped for a 7-yard loss. On the second play, Laurel cornerback Quandarius Keyes took the ball away from Hattiesburg receiver Devance Norman after a 6-yard pass completion.

Keyes motored down the sideline 21 yards to set Laurel up at the Tiger 28-yard-line. That would be a pattern that would be repeated time after time, as the Tornadoes started nine of their 13 possessions in Hattiesburg territory.

“He didn’t tuck the ball, so I just took it away from him,” said Keyes. “That changed the momentum of the game right there.”

The Tornadoes wasted little time finding the end zone, using five plays to go the distance, getting the score on a 1-yard run by Benjamin, following his 18-yard scamper on fourth-and-1.

In fact, Hattiesburg never found an answer for Benjamin, who ran for 129 yards on 16 carries and scored five touchdowns to lead Laurel.

“We are gold-ball chasing,” said Benjamin. “That’s our whole focus. If it takes me to score every touchdown in the game, that’s what I’m going to do. Coach put me in great position to make plays. We’ve just got to keep playing hard.”

Vance gambled again on the ensuing possession, going for a fourth-and-3 from the Tiger 46, but a pass on a fake punt was no good and Laurel needed just five plays to find the end zone again, on a 5-yard run by Benjamin.

Perhaps the biggest play of the game came on Hattiesburg’s next possession, when Wade was sacked for a 4-yard loss on third down and was injured on the play and did not return. Wade reportedly suffered a broken wrist, but that was not confirmed by Vance.

“We’ll know more once he goes to the doctor,” said Vance. “We’ll just have to see. Injuries are a part of the game.”

Without a quarterback, the Tigers were lost, as two backups weren’t on the same page with their center, losing three fumbles in the second half on high snaps, which led to two touchdowns and a safety.

Benjamin capped a nine-play, 57-yard drive on Laurel’s third possession with a 7-yard run, and he made it 27-0 at halftime with another score on a 5-yard run with 3:30 to play in the first half.

“He’s a great player,” said Earnest of his star running back. “He’s waited behind some other really good players, but his approach has never changed.

“He’s been a hard worker whether he’s asked to be a complementary back, the primary back, whatever we’ve asked him to do the last three years, he’s done it with a smile on his face. He’s earned everything he’s gotten and I’m so proud of him.”

It got worse after halftime.

Between the two turnovers, Benjamin scored his fifth TD of the night on a 13-yard run. He would have one more carry, then would retire for the night as Earnest began playing his backups.

“Everybody on our line is over six-foot,” said Benjamin. “I trust them just like they trust me. They push me to go better just like I push them to go better.”

For the game, Hattiesburg was held to a minus-14 yards of offense and just three first downs.

All of Hattiesburg’s first downs came on the final possession of the game, along with 51 rushing yards on five carries by junior Dillon Brown in the final moments to make the Tigers’ yardage total slightly less ugly.

“Just getting a good snap and trying to handle it; we didn’t do a very good job of that,” said Vance. “That was our Achilles heel tonight. But that’s part of it. We’ll regroup and get ready for the playoffs next week.”

Laurel added two more second-half touchdowns on a 7-yard run by junior Caden Arrington and a 3-yard run by sophomore Brayden Jordan, to go with the safety late in the third quarter.

Now, it’s on to the playoffs for the Golden Tornadoes, but not before they savor a victory over their archrivals.

“George County, great program with great players,” said Earnest. “The location doesn’t matter once you kick off. We’re just glad to be in the dance. We know we have our work cut out for us.

“But we’ll worry about the playoffs tomorrow. Tonight, we’re going to celebrate.”

(All photos by Jesse Johnson)