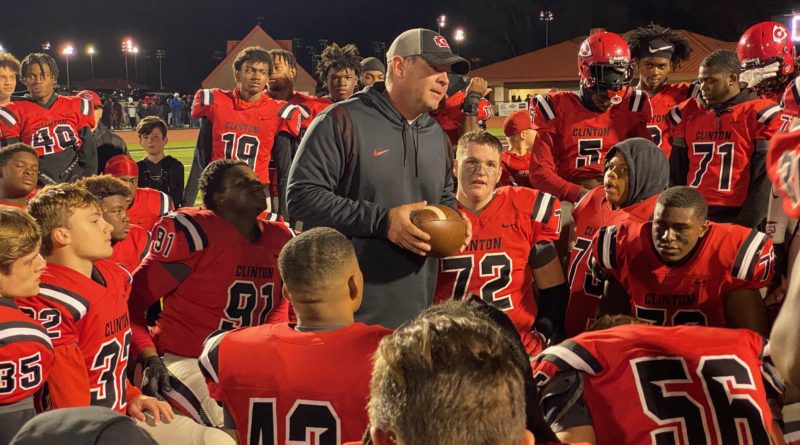 CLINTON — Clinton coach Judd Boswell said he thought Friday’s game against Tupelo with a playoff berth on the line might come down to the final play.

Boy, was he right.

After a tight defensive battle, Clinton senior kicker Luke Hopkins drilled a season-long 40-yard field goal as time expired to lift the Arrows past the Golden Wave 17-14, clinching the fourth and final playoff seed from Region 2.

“I told coach Boswell I was going to make it,” Hopkins said. “But once I got out there, I wasn’t so sure. I put a good kick on it, but I thought it had fallen short. Then I saw everyone celebrating.”

Clinton (5-4) moved to 4-2 in Region 2 games, locking up the No. 4 seed with a game against Murrah remaining next week.

They will face the No. 1 seed out of Region 1, which won’t be decided until next week.

“Our region is just ridiculous,” Boswell said. “I mean it’s just unfair. There are teams that won’t make the playoffs in our region, like Tupelo, that would compete for a title in Region 1. It is what it is and I’m proud of our guys for getting us here, but it’s crazy, man.”

So was Friday’s game — the 47 minutes and 59 seconds of football that proceeded Hopkins’ game-winning field goal was about as even as it gets.

Tupelo (6-4) got on the board first with a little razzle-dazzle on the Golden Wave’s second possession of the ball game.

Quarterback Jeremiah Harrell tossed a backwards pass to Daelyn Patton, who pulled up and heaved the ball down the visiting sideline to a wide open Kedarius Gibson for a 45-yard touchdown to put Tupelo ahead 7-0.

After stalling on its first three possessions, the Clinton offense finally got things going on its fourth possession.

The Arrows drove 68 yards in six plays, highlighted by a 27-yard run from quarterback Juan Taylor and capped by a one-yard run from Jakobe Calvin.

It took Clinton only one second-half possession to regain the upper hand.

After forcing a quick three-and-out on defense, the Arrows drove 50 yards in eight plays and scored on a five-yard run from Taylor to take the 14-7 lead with 6:42 left in the third quarter.

Tupelo tied the game again two possessions later. The Golden Wave got bailed out on a defensive pass interference call on 3rd-&-7 play near midfield and Harrell took advantage, taking the top off the Clinton defense on the very next play with a 46-yard touchdown pass to Gibson.

The Wave had a golden opportunity to take the lead on its next possession after driving down to the Clinton 20-yard line.

Harrell hit Patton for a two-yard gain on 3rd-and-8 to set up a 32 yard field goal, but the try missed wide left.

The Tupelo defense got a huge stop on Clinton’s ensuing possession and forced a punt, but Hopkins — who also serves as the Arrows’ punter — boomed a kick down to the Tupelo seven-yard line.

Harrell aired it out on 3rd-&-9 from the eight-yard line, but his pass fell incomplete and Tupelo was forced to punt.

Clinton got it back with 1:52 left at the Tupelo 40-yard line and moved it down to the Golden Wave 22 yard line in five plays.

After making sure his kicker was comfortable with the distance, Boswell let the clock tick down to 0.8 seconds before calling timeout to set up Hopkins’ game-winner.

Boswell gave the Hopkins the game ball, joking that it was the first time he’d ever given one to a kicker or punter.

There were plenty of other heroes for the home-standing Arrows — tailback Jakobe Calvin rushed 22 times for 68 yards with a touchdown, and defenders Xynarus Haynes, Jacquavyian Carter and Timothy Spann all made huge stops in the backfield.

“We knew we had to stop the run coming in,” Haynes said. “Without the run, they weren’t doing much outside of a couple of big plays. We knew we just had to stay with it, and that’s what we did.”

The loss was soul-crushing for Tupelo, which would have all but guaranteed itself a playoff spot with a win.

Outside of the big 46-yard touchdown play, Tupelo gained just 57 yards in the second half.

“It was two good football teams in a playoff football game,” Tupelo coach Ty Hardin said. “We just needed to take advantage of opportunities a little better. It came down to field position there at the end and we missed our field goal and they made theirs.”