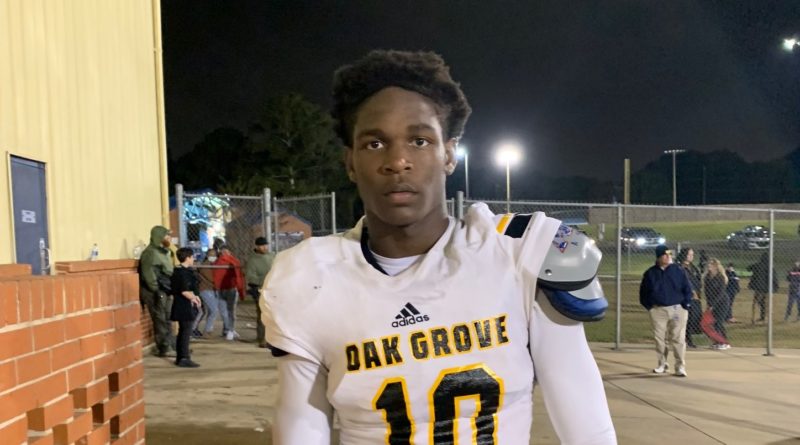 PEARL — The question: how would Oak Grove respond after losing a heartbreaker to Brandon a week ago?

The answer: In a big way.

Behind the play of two-way star Jaylen Aborom, the Warriors got past Pearl 36-25 in a critical Region 3-6A contest at Ray Rogers Stadium on Friday night.

“Our guys prepared the right way this week and we challenged them on Sunday,” said Oak Grove coach Drew Causey. “Jaylen is a heckuva football player and Tyrell Pollard had a good game and the offensive line responded.”

The Warriors scored on the opening drive of the game to take a 6-0 lead as Kabe Barnett connected with Tyrell Pollard on a 10-yard touchdown pass with 8:17 left.

After forcing Pearl to punt on their first drive of the game, Dontavious Howard scored on a 25-yard run to extend the Oak Grove lead to 13-0 with 4:42 left in the first quarter.

Byron Easterling connected on a 23-yard field goal with 14 seconds left in the first quarter to extend the Oak Grove lead to 16-0.

Pearl finally got on the board on a 54-yard touchdown run by Jamari Thompson with 6:22 left in the second quarter to cut the Oak Grove lead to 16-7.

The Warriors responded, as Barnett connected with Pollard on a 28-yard touchdown pass with 4:26 left in the second quarter to extend their lead to 23-7.

The only scoring in the third quarter happened after a turnover. Pearl’s Kayvion Freeman intercepted a pass, and on the next play, Thompson ran in it from 8 yards out. The successful two-point conversion cut the Oak Grove lead to 23-15.

After Pearl turned the ball over on downs, Maddox hit Aborom again on a fourth down play from 35 yards out to give the Warriors a 36-18 lead.

Aborom finished with 107 yards receiving on just four catches with two touchdowns and intercepted one pass on defense.

“Offensive line did a good job blocking and the quarterback threw it up to where I could get,” Aborom said. “We saw what people were posting on social media after last week, so had a good week of practice and came out here and got the win.”

Thompson added a 2-yard touchdown run with 1:39 left for Pearl to cut the lead to 36-25. Thompson finished with 169 yards on 28 carries to lead the Pirates, who will close out the regular-season schedule with the annual “Eat Dirt” game against Brandon next week.

“We came out too timid to start the game and then in the second half we relaxed and played better,” said Pearl coach Justin Hunter. “We are a run-first team and we played behind the chains all night, but now we’ve got to fix some things and prepare for the best rivalry in the state.”