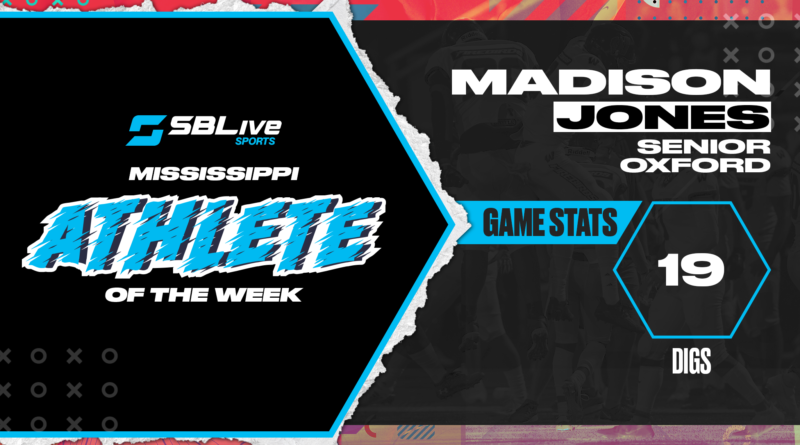 The sophomore libero had 19 digs in Oxford’s 3-0 second-round playoff win over Germantown.

Jones received 43.73% of the vote, beating out Brandon’s Sunni Sheppard who finished second with 14.44%. Clinton’s Jakobe Calvin finished third with 13.44% and Velma Jackson’s Gavin Griffin finished fourth with 7.06%. There were over 72,000 votes tallied this week!

Tacke had 14 kills, 3 digs, a block and an ace to lead Oxford to a second-round playoff victory over Germantown.

Bartholomew totaled 22 kills and 22 digs in playoff wins over D’Iberville and Gulfport.

Caught five touchdown passes in a 39-25 win over Vardaman.

Was credited with 15 tackles, including three for a loss and one sack, in a 10-6 win over Jackson Academy.

Rushed nine times for 189 yards and two touchdowns in a 56-13 win over West Harrison.

Caught five passes for 213 yards, including one touchdown, in a 42-28 win over Meridian.

Jones had 19 digs in Oxford’s 3-0 second-round playoff win over Germantown.

Fisk had 3 catches for 73 Yards and a touchdown, and had two tackles, a pass break-up and an interception on defense in Saltillo’s 27-24 win over Greenville.

Fields rushed for 271 yards and two touchdowns in a 27-14 win over Hernando.