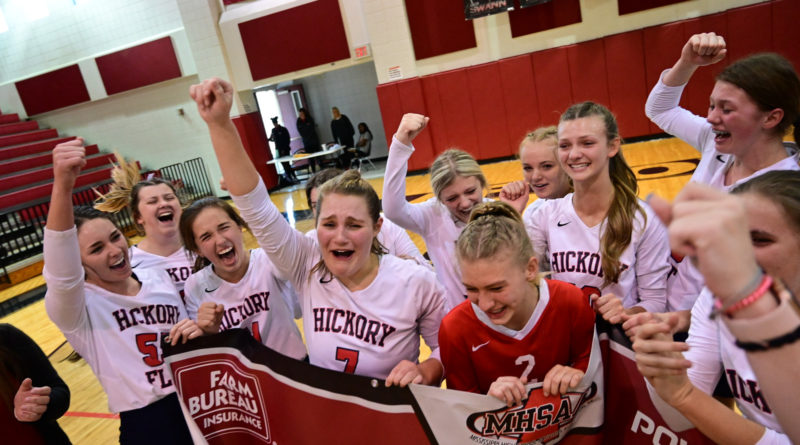 They got it, but it came down to the very end.

“They swept us last year, so we were ready to come back at them and get some revenge,” said Hickory Flat coach Adam Mauney. “It’s a weight lifted off our shoulders and the girls are a great group and gave everything they had the entire season.”

The second set Hickory Flat took a 14-10 lead midway through and held on to take the second second set 25-22 to tie the set.

The Lady Rebels dominated the third set winning 25-18 and taking a 2-1 match lead.

Resurrection rebounded in the fourth set 25-18 to tie the match and take it to a fifth set.

In the fifth set Hickory Flat took a 9-7 and held on to win the final set 15-13 to claim the school’s first state title in volleyball.

“I called timeout to tell them to finish it and told them to settle in because all we needed is two points and it worked out for us,” Mauney said. “Emma has been playing since the eighth grade and her goal was always to get here and win it especially her senior year. This is big for us, the school and the community.”

Wilson had 22 kills to lead Hickory Flat and was named the game’s Most Valuable Player.

“I’m so proud of how we kept fighting even after we’d make a mistake. We did not get stuck in set receive which is something we struggled all year and it paid off,” Wilson said. “We always say one more pass, one more kill, one more point that’s what I tell them all the time. I think last year we were happy to get to come to Jackson and not the game. This year our mind set all year was coming back here and taking it and we did.”

“Both teams played really well, but we made more errors than they did,” said Resurrection coach Keith Tucker. “This match was the way you wanted it to be going five sets, but just didn’t bounce our way.”