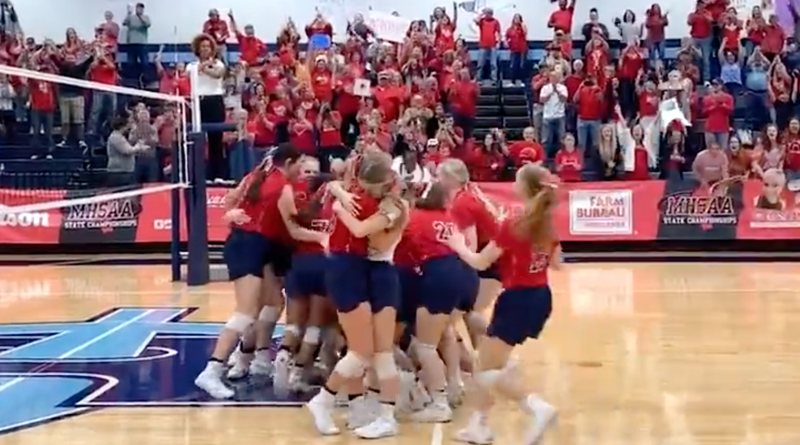 RIDGELAND — Don’t bet against the Belmont Lady Cardinals. Not on the basketball court, and certainly not in the volleyball gym.

Belmont stormed into the Ridgeland High gymnasium Saturday and defeated Sacred Heart 3-0 in the 2A title game to capture the MHSAA State Championship in front of a packed house.

The championship was the first in program history for the Lady Cardinals, and helped erase the sting of losing the 2020 3A State Championship a year ago.

The Lady Cardinals (33-4) were never in danger of coming up short Saturday.

Many of Sacred Heart’s points came on double-tap errors from Belmont, and it was an adjustment the Lady Cardinals had to make to come away with the victory.

“We haven’t had hands called like that in the North this season,” Cleveland said. “That’s why I was so proud of Madasen McCaig and the way she adjusted. She could have crumbled in that moment and not played well, so I was tickled with how well she handled it.”

The Lady Cardinals poured it on in the second set, breaking a 7-7 tie with a 7-0 run to take a commanding 14-7 lead. Sacred Heart cut it to three points at 18-15, but Kathryn Greene and Kerstin Moody kept hammering the back corner with kills and Belmont pulled away to take the second set 25-17.

The third set was more of the same, with unforced errors costing the Lady Crusaders in a 25-12 final set.

The loss spoiled a dream season for Sacred Heart, which reached the first state championship game in program history after losing in South State in 2020.

“It was uncharacteristic for us to make that many errors,” Crusaders coach Kerry Geroux said. “But you have to give Belmont credit — (Moody and Greene) did a great job of hitting it where we weren’t and it kept us off-balance the whole game.”