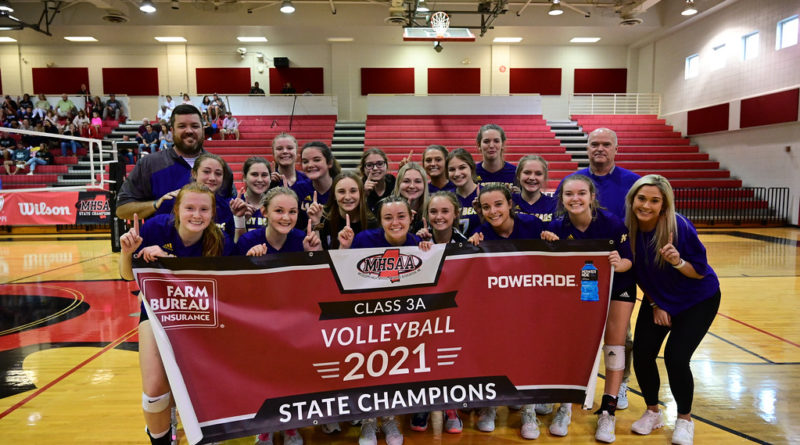 CLINTON — They got over the hump.

“Defense was the key for us today. A lot of blocks and tips because they like to hit deep and we adjusted well,” said Alcorn Central coach Eric Lancaster. “Normally when OLA plays somebody, they have a five-point advantage and they’re the traditional program in the state. The girls weren’t intimidated and did what they normally do.”

The third set was similar to the second as Alcorn Central jumped out to a 10-6 lead and increased their lead to 17-11 midway through and finished the set and the match 25-20 to claim the school’s first state title in volleyball.

“The first set had me worried because OLA played really well and our girls started out slow, but the end of the set where we put it away relieved me.The second and third set they did what they do,” Lancaster said. “Mia is our bell cow, and she makes folks around her better and when she’s on she’s hard to stop. Winning our first state championship is awesome for the school and community, but makes us hungry to win it again.”

Griffin had 22 kills and 12 digs to lead Alcorn Central and was named the game’s Most Valuable Player.

Cayleigh Shipman had 12 kills and Sydney Howie had 15 digs for the Lady Bears.

“We knew OLA was a great team and this team is the best team I’ve been a part of because everyone knew their roles,” Griffin said. “When we ended the first set we were able to relax, but at the same time just keep playing harder – and we did. It’s awesome winning state my senior year … we’ve gone through obstacles this year and we deserve this.”

“Our girls came out and fought hard, but give Alcorn Central credit – they came out and beat us,” said OLA coach Emily Corley.