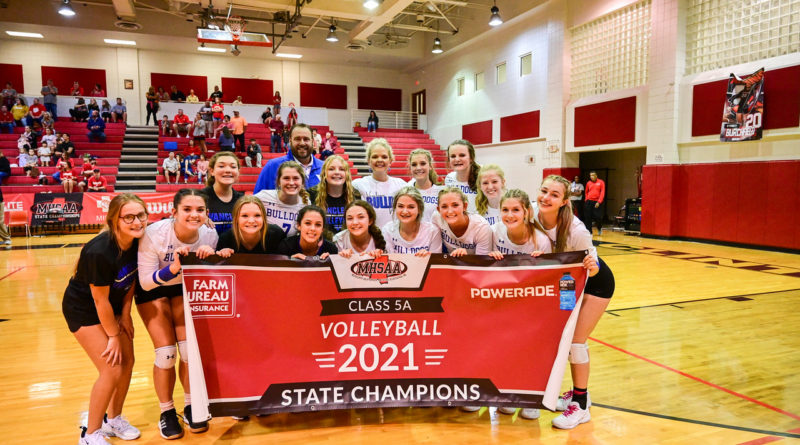 CLINTON — The streak continues for Vancleave, but man, was it close.

It’s Vancleave’s (21-17) fifth straight state championship in volleyball and fifth overall in school history. The Lady Bulldogs won the Class 4A state title four years in row before moving up to 5A this year.

“I told the girls that they had to believe in themselves and that we could finish it,” said first year Vancleave coach Heather Allen. “We’ve been down 2-0 before and came back just the girls had come together and fight together as team and they’ve grown to do that this year.”

In the first set Vancleave jumped out to 8-2 and lead then midway through was up 16-10, but Lafayette rallied to take the opening set of the match 27-25.

To begin the third set Vancleave took a 14-10 lead and held on from there as they took the set 25-22 to cut the Lafayette match lead to 2-1.

The fourth set was back and forth. Vancleave was up 17-15 midway through, but Lafayette rallied to take a 21-19 lead before the Lady Bulldogs called timeout. After the timeout Vancleave went on a 6-1 run to close out the set 25-22 and tie the match up 2-2.

The fifth set was all Vancleave as the Lady Bulldogs jumped out to a 5-0 lead and increased the lead 9-2.

Sydney Cason scored 10 straight points for Vancleave at the of the fourth set and, the beginning of the fifth set.

“Every timeout I told the girls to believe in themselves and that they can do it. Sydney can serve the ball really well and once she gets on a roll, she can do it.,” Allen said. “It’s a big deal for us winning five in a row because we struggled to start the year, but we worked together and got it done.”

Lyndi Bakker was the game’s most valuable player for Vancleave.

“We knew if we wanted to come out on top we had to work as a family and finish strong,” Bakker said. “From where we started the year to where we are now is insane because we’ve worked so hard and we struggled to start. Feels amazing going out my senior year and winning five in a row.”

Lafayette, who was in the state title for the first time in school history, finished the year 24-9.

“You can tell we’ve never been here with it being our first time and we weren’t able to execute to finish the match,” said Lafayette coach Zoe Strock. “I told the girls we will learn from this and come back next year even stronger.”