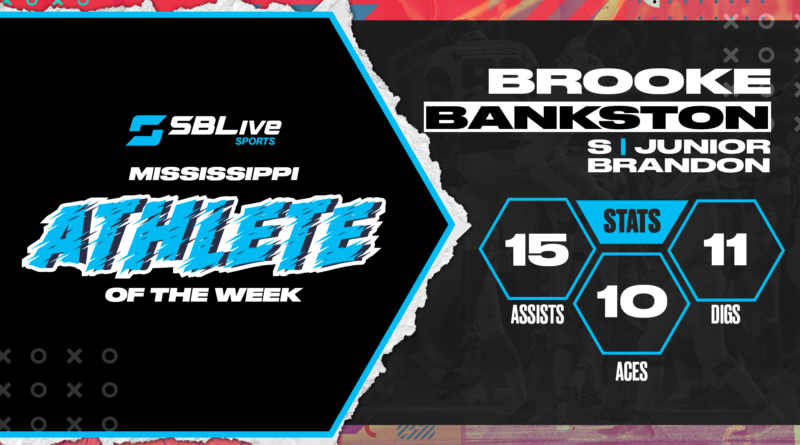 Bankston received 30.7% of the vote, beating out Lamar’s Davis McBrayer who finished second with 27.2%. Enterprise’s Derryon Gray finished third with 13.47% and Hartfield Academy’s Addie McNeely finished fourth with 7.28%. There were over 109,000 votes tallied this week!

Addie McNeely, Hartfield Academy volleyball: McNeely had 24 kills and 17 digs in a 3-1 win over Jackson Prep.

Paige Griffin, Lake Cormorant volleyball: Griffin had 23 digs, 15 kills and 6 aces in a 3-2 win over Hernando,

Eli Anderson, Neshoba Central: Completed 15 of 26 passes for 323 yards and five touchdowns in a 42-35 win over Ridgeland.

Gunner Gilmore, Lewisburg: Completed 28 of 41 passes for 268 yards and two touchdowns in a 35-14 loss to Hernando.

Derryon Gray, Enterprise QB: Gray returned a punt 73 yards for a game-winning touchdown in the fourth quarter to lift Enterprise to a 25-21 win over Union. Gray finished with 77 yards rushing and a TD and passed for 44 yards.

Immanuel Griffin, Ripley: Rushed 17 times for 166 yards and one touchdown in a 10-7 win over New Albany.

D.K. Jenkins, Mendenhall: Completed 15 of 19 passes for 170 yards with three touchdowns, rushed 22 times for 184 yards and a touchdown and intercepted a pass on defense in a 35-28 win over Newton County.

Tyler Nichols, Starkville: Rushed 13 times for 97 yards and two touchdowns in a 28-21 win over Tupelo.

Dawson Phillips, Mooreville: Completed 31 of 45 passes for 437 yards and five touchdowns in a 42-21 win over Corinth.

Tyler Reed, Gulfport: Rushed for 122 yards and three touchdowns in a 49-29 win over Hancock.

Ayden Williams, Ridgeland: Racked up 184 receiving yards with two touchdown catches and another score on the ground in a 42-35 loss to Neshoba Central.