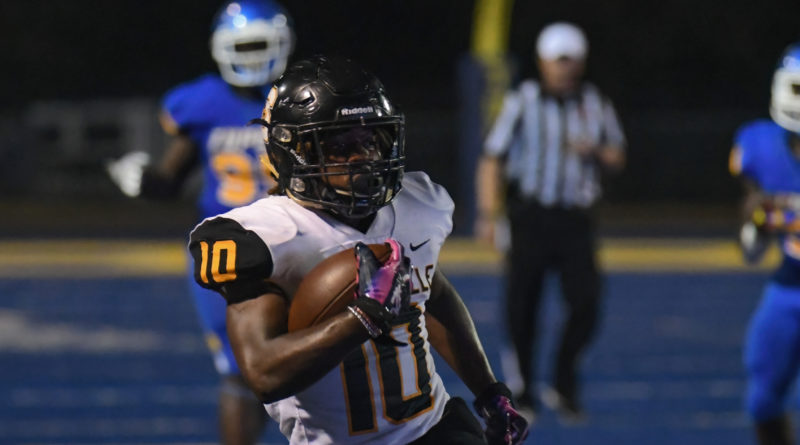 Here’s a look at how the teams in SBLive Mississippi’s Power 10 Rankings fared Friday night:

HOW THE POWER 10 FARED

No. 1 Greenville Christian was off

The Saints didn’t play Friday night. Their next game is at home next week against Delta Streets.

The Greyhounds rolled to a 36-2 halftime lead and pitched a shutout in the second half to move to 7-0. Ocean Springs and Gulfport are both 4-0 in Region 4 games, and appear to be on a collision course for a winner-take-all game on Oct. 29 at Gulfport.

The Yellow Jackets are 7-0 after thrashing the Mustangs in Jackson, and coupled with Oxford’s loss to Clinton Friday night, Starkville is now alone in first place in Region 2 and have an inside track to the top seed in the 6A North Playoffs.

Vic Sutton passed for a career-high 241 yards and three touchdowns as the Jaguars blew past Tupelo at home. MC has now won three games in a row and will be heavily favored the next two weeks against Germantown and Murrah.

The Green Wave got off to a relatively slow start and led just 20-14 at the half, but pulled away in the second half en route to their fifth win of the season. They are also 4-0 in Region 1 games, and have all but locked up the top seed coming out of the region.

The Chargers managed just 172 yards of offense and gave up 203 rushing yards to Clinton tailback Jakobe Calvin. But there’s no rest for the weary in Region 2 — the Chargers head east to face No. 4 Starkville next week.

The Tigers got an early start and dispatched Lewisburg Thursday night. It was the biggest blowout of the season for South Panola, which led 35-3 at the half on the road.

The Mustangs moved to 6-1 overall and 4-0 in Region 3-5A, keeping pace with Wayne County in the process.

Daxx Dodson hit a 26-yard field goal with 43 seconds left to lift the Admirals past the Red Rebels, handing Harrison Central its first loss of the season in the process.