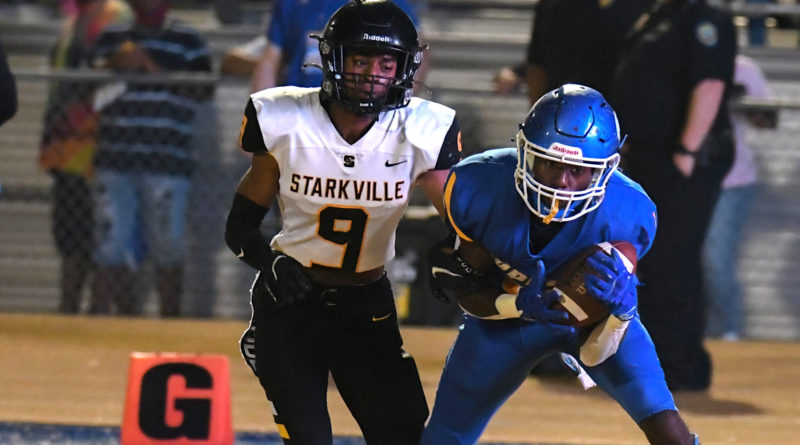 Here’s a look at 15 Mississippi high school defensive backs who have been showing out on the football field this season.

Beavers is one of the holdovers from that Taylorsville team that ran roughshod through Class 2A to the state championship a year ago, and he’s picked up right where he left off. Through four games, the two-way corner has caught seven passes for 127 yards and racked up 19 total tackles on defense with one interception. He holds offers from Jones County Junior College and Southwest Community College.

Dortch is the highest-rated defensive back in the state, according to recruiting service 247sports.com, who lists him as a four-star recruit. Truth be told, Dortch doesn’t play all that much on defense for George County. But he’s a gifted athlete who is often asked to cover the other team’s biggest weapon in key situations. Said coach James Ray: “They don’t usually go that way when they see him out there.” Dortch is being recruited my Ole Miss as a defensive back. He was also recently selected play in the Mississippi/Alabama All-Star Game in the Mississippi secondary.

Durr is a stud at 6-foot-3, splits time between defensive back and outside linebacker and leads the Trojans in total tackles with 55 in five games. That number includes eight stops for a loss and four sacks. He’s being recruited as a corner/safety and was recently selected to play in the Bernard Blackwell North/South All-Star Game.

Elam is a one-man wrecking crew on a team full of them at Greenville Christian. He has great size at 6-foot-2 and 170 pounds and has racked up 33 total tackles though six games. He’s also been credited with five interceptions and three passes defended. He’s rated as a three-star corner by 247sports.com, and currently committed to Mississippi State, although he also holds offers from LSU, Pittsburgh and Southern Miss, among others.

Fletcher was already an important player for Holmes County Central before star teammate Khaumari Rogers went down with a season-ending injury. He’s also a big reason the Jaguars are off to a 4-3 start. He’s a 6-foot-3 athlete rated as a two-star recruit by 247sports.com and currently committed to South Alabama. He was recently selected to play in the Mississippi/Alabama All-Star Game.

The Jaguars have played a brutal first half of the season, but Hartzog is one of the players that have helped them start 2-0 in Region 8-3A. The star corner is 5-foot-10 and 175. He reportedly holds offers from Ole Miss, South Alabama and Southern Miss and was recently selected to play in the Mississippi/Alabama All-Star Game.

Knox has a ben a big part of New Albany’s success this year. He’s a two-way player who has racked up more than 600 total offensive yards in seven games. But he also has 38 total tackles, an interception, one forced fumble and one recovery on defense. He’s rated as a three-star recruit by 247sports.com, and is currently committed to Southern Miss.

Miller is a force for Heritage Academy in the secondary at 5-foot-11 and 185 pounds. Opposing teams don’t throw his way very often, but he’s still racked up 43 tackles, 11 pass break-ups and three forced fumbles through seven games. H’es rated as a three-star safety prospect by 247sports.com and currently committed to Mississippi State, but also holds offers from Florida State, Louisiana Tech and Memphis, among others.

McMillian may be just 5-foot-10, but he is one heckuva corner and a key part of West Point’s tremendous defense. He’s only played four games this season, but has been credited with 13 tackles and 12 defended passes with three interceptions. He was recently selected to play in the Bernard Blackwell North/South All-Star Game.

Singleton is just a ball player. He’s 6-foot and 190 pounds, and racked up 852 all-purpose yards as a junior last season while starting QB-1 and playing both ways. He’s rated as a three-star defensive back prospect by 247sports.com and currently committed to Mississippi State. He also holds offers from Air Force, Arkansas State, Indiana and Louisiana and was recently selected to play in the Mississippi/Alabama All-Star Game.

One of the brightest stars in the junior class in Mississippi, Smith is a 6-foot-2, 180-pound safety for the Indians. Through seven games as a senior, he has 32 total tackles to go along with four interceptions. He’s rated as a four-star recruit by 247sports.com, and already holds offers from Ole Miss, Mississippi State, Michigan State, Notre Dame and West Virginia, among others.

He may be on the small side at 5-foot-9 and 140 pounds, but South Pike’s stellar senior corner plays big. Through five games as a senior, he’s racked up 20 total tackles, including four for a loss, with an interception. He was recently selected to participate in the Bernard Blackwell North/South All-Star Game.

Last but certainly not least, Washington is one of the best players on a defense full of studs for Madison Central. He’s a 6-foot, 175-pounds thumper who has 34 total tackles through six games with two interceptions, one forced fumble and one fumble recovery. He was recently selected to play in the Bernard Blackwell North/South All-Star Game.