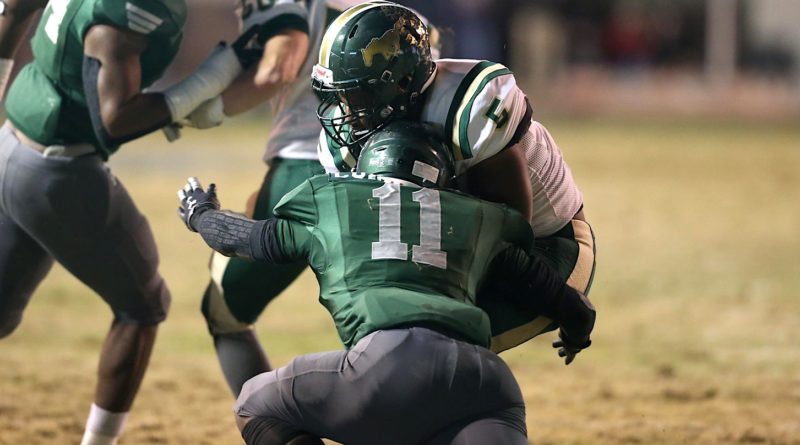 Here’s a look at 15 Mississippi high school linebackers who have been showing out on the football field this season.

Like his name, Blanton has been a stone wall for the Patriots this season. The numbers say it all, being second in the state with 80 total tackles and a whopping 17 tackles for loss and nine sacks through seven games. Even the on-air talent at ESPN were blown away with his physique and talent. He’s rated as a four-star recruit by 247sports.com and holds offers from basically everyone.

Noah is just one of the many Bobcats that are among the best at their particular position. The junior has racked up 75 tackles with 10 TFLs and two sacks. Sumrall has only played five games, so Classen is averaging an impressive 15 tackles per game.

Cunningham has been an impact way before this season began and it’s happening still nearing the midway point of the season. Cunningham was one of the few names selected for the MS/AL All-Star game at season’s end and for god reason. Look for him to do everything in his power to give West Point their 12th gold ball in December.

(Cunningham pictured above in photo by Keith Warren)

Floyd has been on a mission since winning a state title back in December. Floyd has 71 tackles with 11 of them being for loss and two of them being sacks. That’s 14.6 tackles per game. Look for the strong encore to continue down the stretch of the season.

Ford plays his role like his team’s mascot namesake. The three-star, Louisiana Tech commit has 67 total tackles with 10 TFLs and five sacks through five games. Sure, the Wolverines quite the linebacker group all together, but there’s little doubt who stands out among the pack.

The Rockets have plenty of talent across the board, but Griffin stands out as a force to be reckoned with in the front seven. Standing at 6’0 and 230 pounds, Griffin’s physicality is a big reason why he was recently selected to the MS/AL All-Star game.

One of the state’s top prospects for the 2023 class has been nothing short of elite for the Tigers thus far. Although he can play both linebacker and defensive end with his skillset and size, Hinton will be a next-level player at the former.

The Rams’ star linebacker has had an impressive start after not getting the chance to shine a year ago. Kelly has 75 tackles and has been in the backfield quite a bit with 10 tackles for loss and two sacks. Look for him to get even better as the season goes on.

One of the state’s top prospects overall and in south Mississippi has lived up to all the hype this season. The Mississippi State pledge has 34 tackles and six sacks. Throw in three forced fumbles and six pass deflections in there to show his versatility and value to a Hornets team again trying to get over the championship hump.

Nanney is up there among the state’s leading tacklers, having 77 tackles, including 64 solo stops. The senior Blue Devil can play at any position at any time, but undoubtedly, his biggest impact is felt in the front seven.

The Saints have talent littered throughout their roster and perhaps the most talented of the bunch could be Stewart. The Southern Miss commit has 69 tackles with 34 of them being for loss. The intangibles are simply hard to ignore.

The three-year starter has been playing his best football in 2021. Wilbourn has 47 total tackles with 30 of them coming solo. Despite being just one part of an already stacked Commodore defense, Will Hall got his wish of getting him to Hattiesburg come next season.

Wooten is a two-way machine that excels playing linebacker. The senior has recorded 75 tackles through seven game and is among the state’s leading tacklers regardless of classification.

Wilfawn is backing up his solid junior year this season. He’s made 33 stops in five games as a senior, including 10 tackles behind the line of scrimmage. He was recently selected to play in the Bernard Blackwell North/South All-Star Classic.

Through just five games, Wright has been downright nasty playing small-school, smash mouth football. Wright has 78 tackles so far with most of them being solo. That’s 15.6 tackles per game.