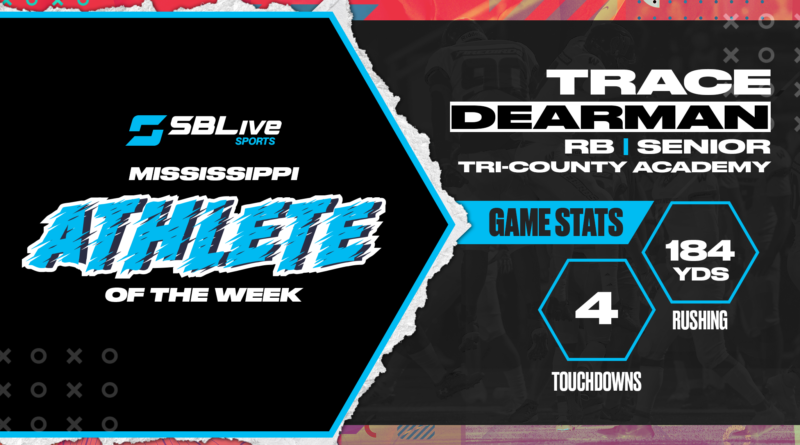 Congratulations to Tri-County Academy running back Trace Dearman for being voted SBLive’s Mississippi High School Athlete of the Week for Sep. 20-26!

The senior rushed 18 times for 184 yards and four touchdowns in a 40-0 win over Canton Academy.

Dearman received 38.77% of the vote, beating out Saltillo’s EJ Fisk who finished second with 12.32%. Jackson Academy’s Merritt Nations finished third with 7.84% and DeSoto Central’s Ryan Musselwhite finished fourth with 5.57%. There were over 80,000 votes tallied this week!

Picked off one pass and returned a fumble for a touchdown in a 42-25 win over Northwest Rankin.

Dedeaux had nine catches for 254 yards and three touchdowns in Sumrall’s 41-35 win over Newton County.

Ford threw for 402 yards and six touchdowns in Sumrall’s win over Newton County.

Completed 11 of 14 passes for 75 yards with three touchdowns and added 74 yards rushing on 11 carries.

Completed 18 of 33 passes for 353 yards, rushed for 92 more and accounted for five total touchdowns in a 41-34 win over Nettleton.

Caught eight passes for 119 yards and two touchdowns and ran for another score in a 28-7 win over Olive Branch.

Caught seven passes for 200 yards and three touchdowns in a 34-2 win over Alcorn Central.

Passed for 626 yards and nine touchdowns in a 70-58 win over Mantachie.

Rushed 18 times for 104 yards and three touchdowns and passed for two more scores in a 35-28 win over Madison Central.

Rushed 29 times for 148 yards and five touchdowns and caught two passes for 21 yards in a 70-58 loss to Mooreville.

Steele went 8-for-11 for 75 yards and one touchdown, had 10 carries for 134 yards and two TDs and returned a kickoff 60 yards for a TD in Kemper County’s 47-7 win over Southeast Lauderdale. He also had an interception on defense.

Credited with 11 solo tackles, three assists and six tackles for a loss in a 34-2 win over Alcorn.

Fisk had seven catches for 119 yards and two tackles, an interception and a fumble recovery in a loss to Cleveland Central.