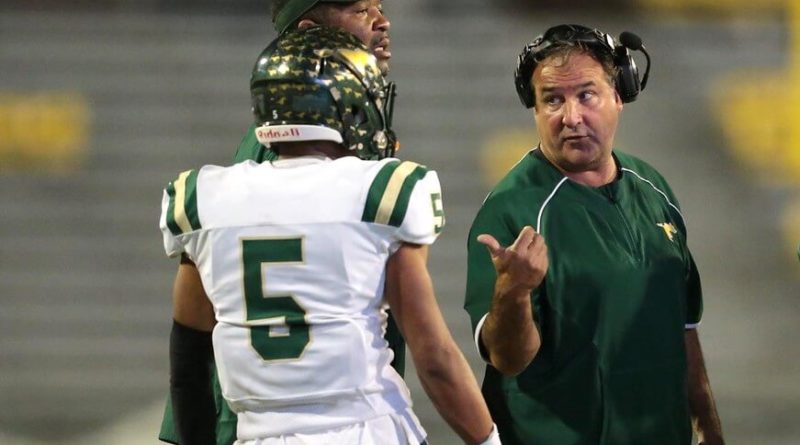 Here’s a look at the SBLive Mississippi Power 10 Rankings for the week of Monday, Oct. 4.

The Saints led 8-0 after one quarter and 30-3 at the half, cruising past Jackson Academy to move to 3-0 against the “Big Three” MAIS schools in Jackson. Their Sept. 17 road win over No. 2 Oak Grove remains the most impressive victory for any team in Mississippi high school football this season.

The Warriors took a 27-7 lead into the half, got an onside kick to start the third quarter and ended up blowing out their rivals over in the Friendly City. It was the second straight win for Oak Grove since losing at home to No. 1 Greenville Christian. They’ve got an intriguing matchup with an overachieving Meridian team this weekend.

The Greyhounds may just be the best team in Class 6A. Friday night’s game was billed as a showdown between the top two teams in Region 4, but Ocean Springs took a 28-0 lead into halftime and coasted to an easy win over D’Iberville. Coach Blake Pennock’s bunch has passed every test in the first half of the season, and will secure the top seed coming out of Region 4 if it can do the same in the second.

The Yellow Jackets pulled one out of their hats for the second week in a row. Sophomore sensation Trey Petty tossed a touchdown pass with 7:17 left and the Jackets converted the two-point play to tie it at 21-21. The defense got a turnover on downs with 2:15 on the clock and Petty hit the winning touchdown pass with 59 seconds left. The Starkville may be a year early, but they are here now and will be a force to be reckoned with in Region 2.

The Jaguars (4-1) took care of business on homecoming, shutting out Grenada and riding that explosive running game to an easy win. Madison Central rushed for 295 yards as a team and the defense held Grenada to six first downs. Next up is a huge road test against a good Clinton team seeking revenge for a 35-14 loss in Madison last year.

The Green Wave were slow to get going, but once they did, the floodgates opened. West Point took a 3-0 lead into halftime, then exploded for 28 points in the second half to beat a good New Hope team handily. The offense continues to gel, but the defense has been fantastic: The Green Wave has now played eight quarters of Region 1-5A football without giving up a single point.

Coach Chris Cutcliffe called Friday night’s game the most complete one his team has played this year, and it’s easy to see why — the defense dominated and the offense thrived on offense thanks to a steady running game that racked up nearly 200 yards against a really good Tupelo defense. Oxford moved to 2-0 in Region 2 with the win, and can get to 3-0 this week if they can win at Germantown.

The Tigers erased a 14-7 first-quarter deficit and took the 21-14 lead just before the half on David Hubbard’s 29-yard touchdown pass to Seandun Clark. The 56 points was the most scored by a South Panola team since Oct. 18, 2019, and the Tigers have now won seven out of eight games going back to last season.

The Red Rebels squeaked out a close win for the second week in a row. Biloxi actually led that game 16-10 at the halftime break, but Harrison Central closed it out with a 16-6 run in the second half to stay unbeaten. The Red Rebels second-half schedule is backloaded, with its two biggest challenges coming back-to-back against D’Iberville and Ocean Springs on Oct. 29 and Nov. 4 to close out the season.

The Mustangs have flown under the radar since losing to Madison Central in the season-opener, but their resume looks more impressive with each passing week. The defense didn’t surrender a single point in September, and picked up right where it left off with another shoutout last week against Natchez. They have now outscored their last four opponents 132-2.