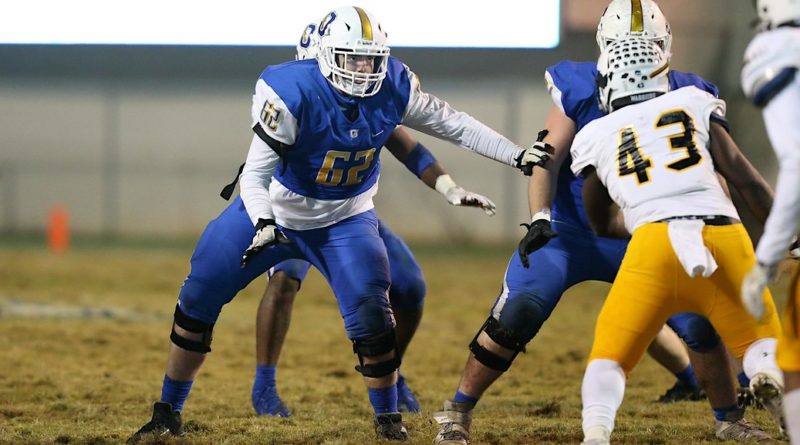 Here’s a look at 15 Mississippi high school offensive linemen who have been showing out on the football field this season.

VOTE NOW: WHO IS THE BEST OFFENSIVE LINEMAN IN MISSISSIPPI?

A lot of player deserve credit for Tupelo’s hot start in 2021, and Zay Alexander is certainly one of them. The Golden Wave’s big 6-foot-7, 325-pound mauler will likely end up being one of the hottest commodities in the state next season as his recruiting heats up. He’s currently listed as a three-star prospect and holds offers from Florida, Georgia, Ole Miss and Mississippi State.

Some of the guys on our list may have been overlooked, but it’s hard to ignore Adams County Christian’s largest player. Barnes is an absolute load at 6-foot-5 and 300 pounds, which gives him a height and weight advantage at pretty much any level of MAIS. He is rated as a three-star recruit by 247sports.com and is currently committed to Southern Miss.

Kamron’s brother Kyron is about an inch shorter, but just as athletic. He is also rated as a three-star prospect and committed to Southern Miss. He and his brother have been a stellar combo up front for the Rebels.

Boley is one of the holdovers on the offensive line from Oak Grove’s impressive 6A state title run in 2020. He was a big part of that unit’s success, and it certainly got the attention of college coaches. The 6-foot-6, 285-pound senior is listed as a three-star prospect by Rivals.com and is currently committed to Colorado.

We don’t know what they are feeding Zyrus Craft in Mount Olive, but they are probably going to run out it. The Pirates’ offensive tackle is 6-foot-5 and 375 pounds of country boy. He remains uncommitted, but has offers from Louisiana, Ole Miss, Mississippi State, South Alabama and Tulane, according to Rivals.com.

What’s not to like about the Bobcats’ big senior tackle? He’s athletic at 6-foot-6 and 275 pounds and has been creating running lanes in Hattiesburg for years. Rivals.com rates Edwards as a three-star prospect. He is currently committed to the University of Colorado.

One of the most athletic guys on this list is big 6-foot-4, 250-pound Malik Ellis from Laurel. Ellis has room to grow and has already garnered offers from Auburn, Ole Miss, Mississippi State, Missouri and Memphis, among others.

Everyone knows Gautier has an explosive offense, but there are some unsung heroes on that offensive line, and that starts with the big 6-foot-6, 320-pound Ole Miss commit. Rivals.com rates Hurst as a four-star prospect. He also had offers from Arkansas, Auburn and Florida State, among others.

A lot of schools have been recruiting Union’s elite interior lineman for years, and it’s easy to see why. He’s athletic at 6-foot-3 and 275 pounds and fits the mold of a prototypical, versatile blocker. Pascal is committed to Arkansas State, but also holds offers from Louisiana, South Alabama and Western Kentucky, among others.

Pollard played a huge role on the line for Oak Grove during it’s state title run in 2021, and he’s picked up right where he left off this year. Pollard is 6-foot-4 and 280 pounds and holds offers from Colorado, East Carolina, Houston, Liberty and Arkansas State.

There are a lot of guys who deserve credit for Brandon’s resurgence, and Rogers is certainly among them. The big 6-foot-4, 290-pound tackle is the younger brother of Mississippi State quarterback Will Rogers. He holds an offer from Southern Miss, but you can bet they’ll have competition when his recruiting ramps up next season.

Benton Academy’s got big mauler who has dominated the MAIS ranks for a couple of years. Saxton has good size at 6-foot-3 and 320 pounds, and is rated as a three-star recruit by 247sports.com. He is currently committed to Southern Miss.

Stratton Smith (pictured above) has been a big part of the Oxford offense for years and projects as a more-than-capable interior lineman at the next level. He has received interest from Memphis, Mississippi State, Ole Miss and Southern Miss.

You don’t see many 17-year-olds listed on a roster at 6-foot-8, but when you do, they are tough to overlook. Hartfield Academy’s 285-pound tackle really is that big, and college recruiters are taking note. He’s listed as a three-star prospect, according to Rivals.com, has one offer from Louisville and has garnered interest from Auburn, Florida and Georgia, among others.