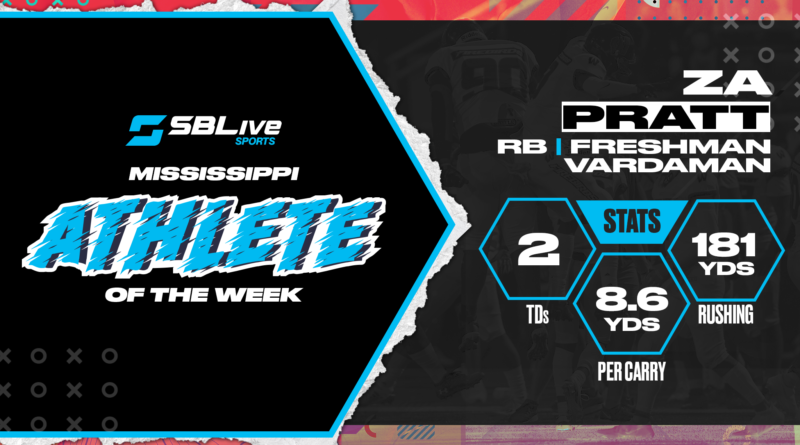 Congratulations to Vardaman running back Za Pratt for being voted SBLive’s Mississippi High School Athlete of the Week for Sep. 13-19!

The freshman averaged 8.6 yards per carry while rushing 21 times for 181 yards and 2 TDs in Vardaman’s 43-0 win against Myrtle.

Pratt received 44.33% of the vote, beating out Murrah’s Trenston Sanders who finished second with 12.32%. Houston’s Jalen Washington finished third with 10.65% and Kosciusko’s Lee Wade finished fourth with 6.67%. There were over 75,000 votes tallied this week!

Dillon Brown, Hattiesburg: Rushed 18 times for 168 yards and two touchdowns in a 41-35 loss to Meridian.

Dalton Davis, MRA: Caught nine passes for 177 yards and downed two punts inside the five-yard line in a 35-7 win over Jackson Academy.

Charlie Fair, Lafayette County: Completed 10 of 19 passes for 221 yards with one touchdown to help the Commodores beat No. 3 Oxford 34-23.

Marquis Fields, DeSoto Central: Rushed 21 times for 152 yards and a touchdown in a 27-20 loss to Grenada.

River Ford, Belmont: Recorded three interceptions on defense and rushed for 54 yards and a touchdown on offense in a 47-0 win over Hatley.

Charleston French, Amory: Rushed for 223 yards and three touchdowns in the Panthers’ 50-21 win over Mooreville.

Kaden Irving, Gautier: Passed for 420 yards with three touchdowns and three interceptions in a 30-26 win over Moss Point.

Jeffery Johnson Jr., Murrah: Credited with 16 tackles, including three for a loss, and returned a pick-six 90 yards for a touchdown in a 15-12 win over Port Gibson.

Jerry Johnson, Pearl: Completed 8 of 14 passes for 180 yards and three touchdowns, rushed 11 times for 153 yards and another score and intercepted a pass on defense in the Pirates’ 47-21 win over Biloxi.

Duran Parrish, Biloxi: Caught eight passes for 107 yards, including one touchdown, in the Indians’ 47-21 loss to Pearl.

Eli Reno, Belmont: Rushed for 96 yards and three touchdowns and logged 12 tackles in a 47-0 win over Hatley.

Cyrus Rone, Ethel: Rushed six times for 169 yards and two touchdowns, returned a kickoff 83 yards for another score, recorded two sacks, one fumble recovery and got credited with eight tackles on defense in a 43-0 win over East Rankin Academy.

Trenston Sanders, Murrah: Was credited with 14 tackles, including two for a loss, with two sacks in a 15-12 win over Port Gibson.

Deriaun Townsend, Winona: Rushed 17 times for 164 yards and three touchdowns in a 57-14 win over Philadelphia.

Lee Wade, Kosciusko: Accounted for all four touchdown’s in the Whippets’ 28-20 win over Choctaw County, rushing for two touchdowns, returning a 30-yard pick-six and tossing an 80-yard scoring pass.

Jatarian Ware, Amory: Rushed for three touchdowns and threw for another in the Panthers’ 38-7 win over North Pontotoc.

Jalen Washington, Houston: Rushed 20 times for 350 yards and five touchdowns in a 46-24 win over Corinth.

JT Beasley, Saltillo WR: Beasley had four catches for 87 yards and a touchdown in a 29-26 win over Pontotoc.

EJ Fisk, Saltillo ATH: Fisk caught a touchdown pass on offense and had eight tackles, three pass break-ups and an interception on defense in a win over Pontotoc.

Eli Anderson, Neshoba Central QB: Anderson went 8-of-13 for 198 yards and three touchdowns and rushed five times for 60 yards and two more TDs in a 48-14 win over Holmes County Central.