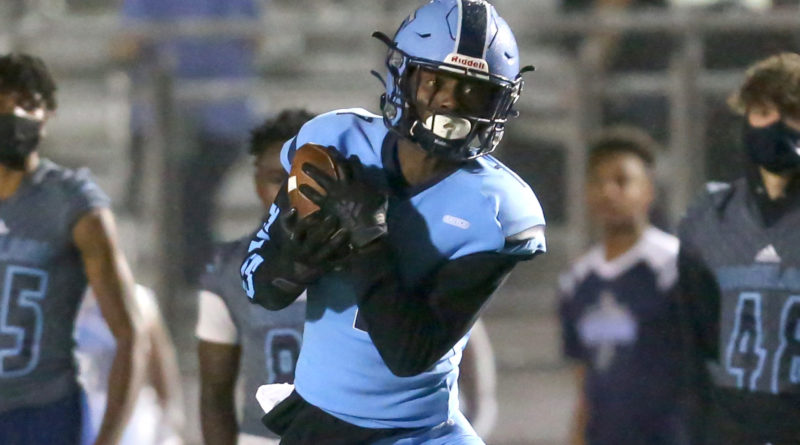 With the 2021 high school football season in full swing, SBLive is taking a look at the best players in Mississippi, position by position. Here’s a look at 15 Mississippi high school wide receivers who have been showing out on the football field.

Bell may be first on this list because of his last name, but he could arguably be first on his list anyway, based on his eye-popping start to the 2021 season. Through five games, Bell has 616 yards on 23 catches with 10 touchdown passes. With a 6’2, 210 pound frame, Bell is a nightmare matchup against any corner and any opponent. He’s currently committed to Southern Miss.

A two-way player that does plenty of damage on the offensive side of the ball. Dalton is among the state’s receiving leaders with his 587 yards, four scores and 16.9 yards per catch. Despite multiple weapons out wide, Dalton’s size makes him stand out from all sides of the field.

Dedeaux’s first two games of the season speaks for itself. Don’t expect those games being the only monumental performances this season. Dedeaux has a total of 16 catches for 309 yards and five touchdowns through the air.

There’s a reason why Lane Kiffin wants this guy in his offense soon. The Ole Miss pledge has performed as expected through four games, with 374 yards on 22 catches. Eight touchdowns through the air makes it hard for any defensive coaching staff to ignore.

The son of legendary Mississippi running back Marcus Dupree is having a whale of a year through the air, ironically. Dupree is averaging 15.1 yards per catch with his five touchdowns. His quarterback, Eli Anderson, has to like his chances every Friday night because of his playmaking ability.

The Jaguars have always boasted big pass catchers through the years, Gunter is no exception. The 6’3”, 230 pound physical target has six catches for 115 yards and leads his team with two scores through the air. He also serves a valuable asset in the run game, being a tight end.

The Southern Miss commit does a little bit of everything offensively, but his capabilities out wide are impossible to ignore. Knox has big play ability, as his 18.4 yards per catch indicate. Expect a strong encore this season before going down to Hattiesburg to play for Will Hall.

The Gators are littered with playmakers, and Morgan may be the most productive one. Morgan has 411 yards on 26 catches and four touchdown catches through four games. What he may lack in size, he’ll make up for with production and grit.

It didn’t take long for the Bearcats to realize they have a game changer. Nelson almost averages a quarter of a football field per catch, yes, 418 yards on 18 catches. Through four games of varsity action, he’s given everyone a reason to believe he’ll be a baller for the next few years.

Just another Gator the rest of 5A will have to contain. With almost 20 yards per catch, Phillips is a home run hitter on the gridiron. The scary part is, he’ll be sticking around for another year to help Gautier contend for the region crown.

Pollard played a big role in Oak Grove’s perfect season with a state championship last year and will should be big down the stretch. Even though the stats haven’t been galvanizing so far, there’s no denying his impact when on the field. Watch out, 6A Region 3.

The state’s current receiving yards king will always be circled in defensive meetings. Numbers never lie. Scott has 39 catches, 663 yards and nine scores through the air.

An all-around receiver who can make things happen on any given play. Toler is among the state’s top receiving leaders with his 27 catches for 428 yards and five scores. Toler has the spark plug for the Patriots through six games and don’t expect that to stop anytime soon.

No Zy McDonald, no problem for Williams in year two of varsity ball. Williams has 27 catches for 519 yards and seven scores, and highlights an offense that has scored over 40 points three times this season.