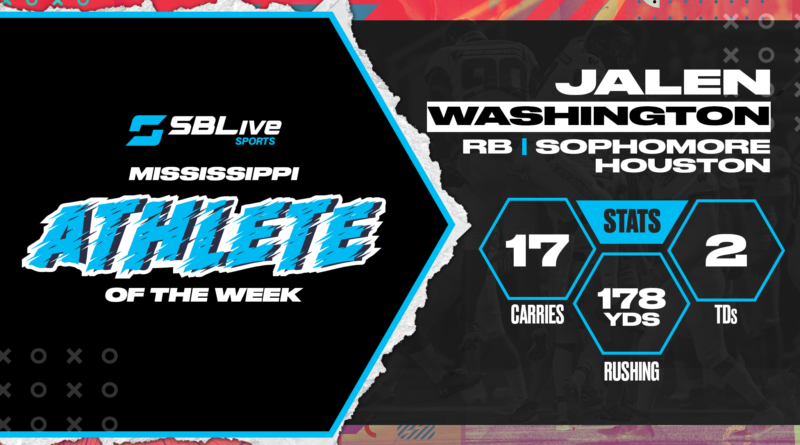 Congratulations to Houston running back Jalen Washington for being voted SBLive’s Mississippi High School Athlete of the Week for Sep. 6-12!

The sophomore rushed for 17 times for 178 yards and two touchdowns in a 49-6 win over Shannon.

Washington received 37.71% of the vote, beating out DeSoto Central’s Ryan Musselwhite who finished second with 35.26%. West Point’s Cameron Young finished third with 8.15% and Warren Central’s Treyvion Hall finished fourth with 6.91%. There were over 93,000 votes tallied this week!

Beasley had five receptions for 168 yards and two touchdowns in a 40-33 loss to Nettleton.

Rushed 16 times for 115 yards and two touchdowns and added an 85-yard kickoff return in a 42-20 win over Pascagoula.

Boyd rushed 16 times for 241yds and two TDs, returned two kickoffs for a total of 88 yards and had three pass break-ups on defense in a 50-44 loss to North Panola.

Rushed 13 times for 157 yards and four touchdowns in a 38-7 win over Northwest Rankin.

Racked up 230 yards of total offense to go with two touchdowns in a 27-0 win over Hattiesburg in the Hub City Classic.

Caught two touchdown passes, including the game-winner with four seconds left, in a 27-24 win over Germantown.

Johnson went 23-of-45 for 461 yards and 3 TDs and added a rushing TD and two-point conversion in Saltillo’s loss to Nettleton.

Caught seven passes for 62 yards, including two touchdowns. He was also credited with eight tackles on defense, including one for a loss, with one sack.

Stepped in front of a pass with less than 30 seconds on the clock and returned it for a pick-six to ice Picayune’s 35-21 win over Gulfport.

Smith had six receptions for 104 yards in Saltillo’s loss to Nettleton.