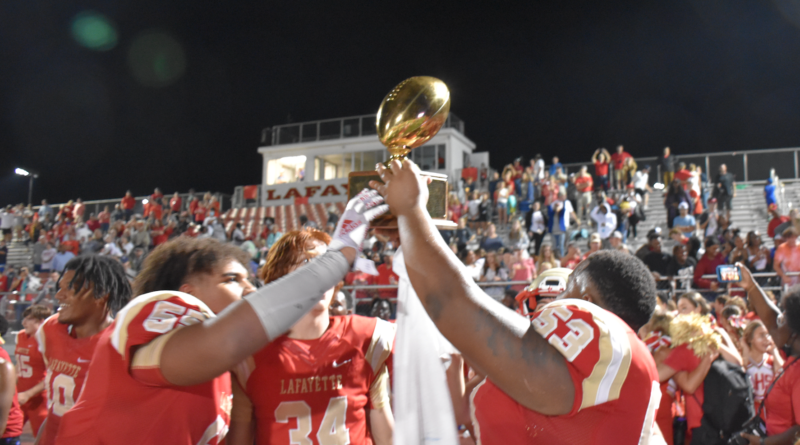 OXFORD — The dominant Lafayette defense looked mortal right out of the gate.

After the visiting Chargers scored on their first four possessions and opened up a 23-7 lead in the 50th Annual Crosstown Classic, the Commodores gave Oxford a taste of what they’re known for the rest of the way.

Lafayette overcame a 16-point deficit, scored 27 unanswered points and shut down No. 3 Oxford en route to a 34-23 victory in the 50th annual Crosstown Classic. With the win, the Commodores now lead the annual series 25-23-2 and snapped a four-game losing streak to the Chargers.

“For the first time all year, we looked like a football team,” Lafayette coach Michael Fair said. “We executed in all three phases of the game. It’s fun to watch a team come together like that.”

The Commodores put together a well-balanced offensive attack. Charlie Fair stepped up in a big way for the second week in a row. He finished 10-for-19 passing for 221 yards with a touchdown, while tailback Jay Reed had 199 yards to go along with his three scores on the ground. Lafayette did not commit a single turnover.

“I thought he played well,” Michael Fair said. “We held on to the ball, which was the main thing with a young quarterback. He made plays with the guys around him.”

Oxford drew blood on the game’s first possession, following a deep ball from Michael Harvey to Cashe Shows that set up a 25-yard field goal by William Wilkinson. On their next drive, Trip Maxwell led the Chargers down the field and found tight end Jack Harper all alone for a 19-yard touchdown pass. With 4:33 left in the opening quarter, the Chargers had a 9-0 lead following a failed two-point attempt.

Charlie Fair replaced starter Drew Dabney at quarterback on Lafayette’s second drive and connected with Kylen Vaughn numerous times en route to an answering touchdown. Jay Reed finished the drive with a four-yard scoring run, but the Chargers countered with back-to-back scores from Roman Gregory and Tracy Harris. With 7:13 left in the first half, Oxford had that commanding 23-7 lead.

Then, the avalanche came.

“We felt it early,” Fair said. “I thought we played a little tight early and missed tackles, which is a little unorthodox with this group. It was almost like we were playing not to screw up. Once we got over that, we played ball.”

A big 45-yard run by Reed through the teeth of the Oxford defense set up Trikyus Woodall with a goal-line TD to cut into the deficit. The Commodore defense answered the call by forcing a turnover on downs near midfield, and Fair threw a perfect deep ball to Vaughn from 45 yards out. Just like that, Lafayette trailed only 23-21 with 3:40 left in the first half.

The Commodores threatened again with just over a minute left until halftime, but a stop by Oxford’s Ben Goubeaux preserved his team’s two-point lead going into the locker room.

In the first half alone, Kylen Vaughn had five catches for 127 yards for Lafayette while Jay Reed had 88 yards on 14 carries. Fair went 6-for-11 for 130 yards in the first half.

Coming out of the locker room, the Chargers came up with another stop inside their own territory by forcing a turnover on downs, but failed to capitalize offensively.

Just under a minute into the game’s final quarter, the Commodores recovered a dropped punt to give their offense a short field at Oxford’s 47-yard line. Fair, Reed and company put together a methodical drive that ended with Lafayette getting their first lead of the night. Reed scored on the goal line with 9:40 left to play and gave his team a 27-23 edge.

The Chargers reached Lafayette territory on the ensuing drive, but got no further. A punt allowed the ‘Dores to milk almost three minutes off the clock as they drove into the Oxford red zone. With 2:21 left to play, Hudson Nelson’s 25-yard field goal hit the left upright and gave the Chargers a chance to win it.

Lafayette’s defense delivered when it mattered, forcing a turnover on downs. Reed provided the dagge with a 25-yard touchdown the very next play, and a late interception by Jeremiah Tanner put the game on ice.

Both Oxford and Lafayette will open up region play next week in their respective classifications, with Lafayette traveling to West Point and Oxford hosting Murrah. Both kickoffs are set for 7 p.m.

“It’s just another game for us, but this one has a little more meaning for us,” Lafayette defensive end D.J. Burgess said. “We have some bragging rights, but we have a bigger goal.”