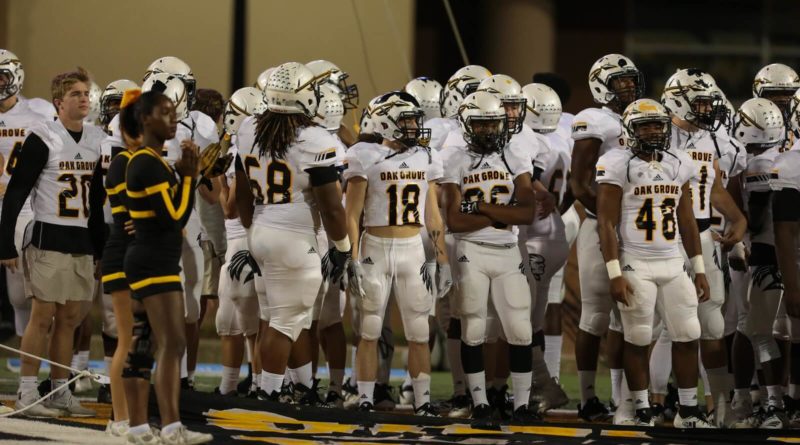 HATTIESBURG, Miss. – If there was any doubt left in anyone’s mind that Greenville Christian belongs in the conversation as one of the best teams in Mississippi, those doubts should be just about gone.

The Saints marched into Warrior Field Friday and took down No. 1-ranked Oak Grove 48-41, and it should not be viewed by anyone as an upset.

Greenville Christian, the top-ranked team in MAIS, improved to 5-1 while dropping the Warriors to 2-1, snapping their 15-game winning streak.

“I think it’s pretty special for us to even have that conversation of being ‘are you the best team in the state,’” said GCS coach Jon Reed McLendon. “That’s huge. It’s humbling, but it’s exciting to even be in that conversation.”

The Saints made believers out of Oak Grove with a dominant offensive performance that kept the Warriors on their heels all night.

Greenville Christian ran all over the defending Class 6A state champions to the tune of 597 yards of offense, split almost evenly through the air and on the ground.

The unquestioned star of the game was Saints senior quarterback D.J. Smith, who completed 16 of 34 passes for 302 yards and two touchdown passes, and ran 23 times for 122 yards and four scores.

“I’m so proud of the way we overcame adversity tonight,” said Smith. “I love all of my brothers. I just had to come out and play like the dog I am.

Smith was more than ably abetted by senior tailback Marlon Palmer, who gained 205 yards on 16 carries and a touchdown.

“He’s a great player,” said McLendon. “He’s a guy who has not gotten a lot of offers, but he is really good. I thought he showed something tonight against one of the best teams in the state. He’s a difference maker at the running back position for us.”

Oak Grove stayed in the game and had plenty of chances to score, but was shut out in the fourth quarter, as the Saints rallied from a seven-point deficit with two long scoring drives.

“I thought it was a heck of a ball game between two good teams,” said Oak Grove coach Drew Causey. “I wouldn’t say we got outplayed. We made mistakes; they made mistakes. They made maybe one or two more plays than we did.”

In fact, the Warriors struggled on offense, totaling just 307 yards, with two of their touchdowns coming on a kickoff return and a pick-6 by the defense.

Despite the final score, the fireworks didn’t start until the second quarter, after a scoreless first quarter that featured three turnovers, a fumble and an interception for Greenville and interception by the Warriors.

The second quarter made up for it and then some.

The Warriors got on the scoreboard first, as Kabe Barnett’s 10-yard run capped a six-play, 51-yard drive after the defense stopped the Saints on a fourth-down play.

On the ensuing kickoff, the returner was ruled down at the Saints’ 3-yard-line and it seemed like Oak Grove had all the momentum.

But that was when the Saints kicked their offense into gear. Smith immediately got GCS out of the hole with a 32-yard run, then connected with senior Chris Bell for a 62-yard catch-and-run for a touchdown.

Greenville Christian doesn’t have a placekicker, and the Saints were denied on the PAT, leaving Oak Grove ahead 7-6.

That didn’t last long. After forcing a punt, the Saints took over at their own 15 and needed just four plays to cover the distance.

A 12-yard run by Smith, a 36-yard scamper by Palmer and a 32-yard pass from Smith to Ladarius Davenport, with a 2-yard face mask penalty tacked on, put the Saints at the Oak Grove 2, and Smith bulled his way for the score from there.

Smith and Palmer hooked up for the conversion and a 14-7 lead.

“We came in here with something to prove,” said Smith. “I love my guys.”

Two plays later, junior Trey Rhodes stepped in front of a Barnett pass at the Oak Grove 33 and dashed down the sideline all the way to the 1-yard-line before being bumped out of bounds. Smith covered that yard, but the PAT pass failed.

On the kickoff, Oak Grove sophomore P.J. Woodland found a seam on the left side of the coverage and dashed 83 yards for a touchdown to get the Warriors back in the game.

That didn’t seem to faze the Saints, as Smith and Bell connected again for 76-yard pass play.

Again, the PAT pass failed, and this time it was the Warriors who got the big play, as Barnett found senior Tyrell Pollard open along the right sideline, and Pollard raced to the end zone for a 71-yard scoring play.

After forcing a three-and-out, followed by a 7-yard punt, the Warriors took over at the Saints 22 and scored again with 21 seconds left in the first half on a 12-yard pass from Barnett to junior Jaylon Aborom.

Oak Grove took a 27-26 lead into halftime, but that was the end of the highlight reel for Barnett, who had a rough night, completing just 11 of 29 passes for 202 yards and the two first-half touchdowns.

“Kabe’s just got to find a groove,” said Causey. “We had a couple of turnovers that went against us, that hurt us offensively. When you score 41 points in a game, I don’t know how out of sync that is.

“I felt like as a team, we played really hard, we gave great effort, and I’m proud of our guys for that.”

Barnett’s woes were evident from the start of the third quarter. Getting the ball to start the second half, the Warriors went nowhere on a three-and out.

Greenville Christian took over and drove to the Warrior 22, where Smith lost a fumble to stop the drive.

But on the first-down play from their own 13, Barnett was called for intentional ground, marking the ball back to the 1-yard-line, and on the next play, the Warriors were flagged for holding in the end zone, resulting in a safety for the Saints.

Following an exchange of punts, the Saints hit paydirt again, with Palmer, breaking through the middle of the line and roaring 63 yards for a touchdown.

“I had a little injury earlier in the week, but I had to fight through for my team,” said Palmer. “They needed me tonight.”

Oak Grove had one more burst left, taking the ensuing kickoff 65 yards on seven plays, with Dontavious Howard scoring on a 4-yard run.

Three plays later, Woodland swiped a pass from Smith at the 28-yard-line and dashed untouched for a score that put the Warriors ahead 41-34.

At that point, many of the Greenville Christian players were cramping, including Smith, and with only 36 on his roster, McLendon wasn’t sure he had enough bodies to finish the game.

“It’s the same message we preached at halftime, composure,” said McLendon. “We can’t get outside ourselves; we can’t let adversity get to us. Play the next play, continue to fight through it, continue to play our game. We felt like we matched up with them.”

But the Saints fought through it and played brilliantly in the fourth quarter, driving 78 yards on 13 plays, with Smith scoring on a 4-yard run. Smith completed a jump pass to J.D. Stewart for the conversion that put Greenville Christian ahead for good.

“I’m so proud of the kids. They stayed in it, we composed ourselves a little bit and stayed in the fight.”

After stopping Oak Grove on a fourth down, the Saints took advantage of some incredible luck on an eight-play, 56-yard scoring drive.

GCS fumbled the ball three times in the drive, but not only managed to retain the ball, but turned the third one into a 13-yard run by Palmer that set up Smith’s fourth scoring run of the night, from 2 yards out.

“When I saw (Smith) turn around, I saw the ball pop out of his hands,” said Palmer. “One of the Oak Grove players tipped it, and I just had to catch it and run with it. We had a lot to prove tonight.”

The PAT pass failed, giving Oak Grove life, but the Warriors lost a fumble near midfield on the ensuing drive, then were stopped on fourth down with 1:08 to play.

“This was an opportunity for us to show that we belong with some of the best teams in the state,” said McLendon. “Oak Grove’s got a heck of a program, just first class, one of the premier programs in the state.

“We said, ‘let’s go,’ We feel like with match-up talent-wise, let’s prepare well and play our game and the rest will take care of itself.”

Greenville Christian will play at home next week, facing Riverside, followed by a trip to battle Jackson Academy. Oak Grove, meanwhile, will open Region 3-6A play at Warren Central.