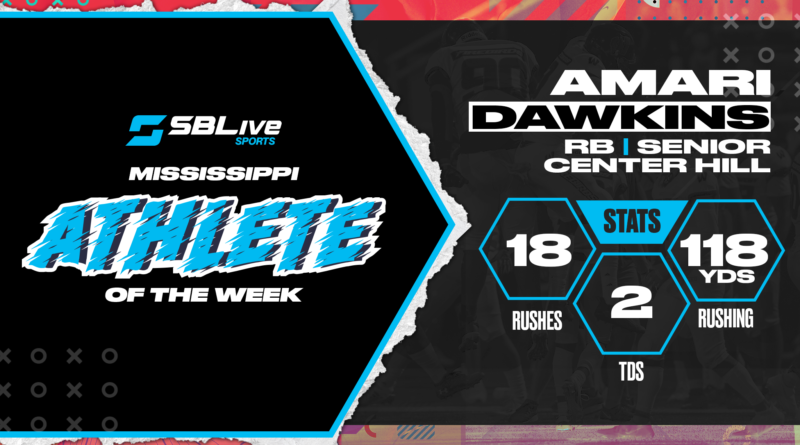 Congratulations to Center Hill running back Amari Dawkins for being voted SBLive’s Mississippi High School Athlete of the Week for Aug. 30-Sep. 5!

Dawkins received 36.85% of the vote, beating out Lewisburg’s Coleman Dowell who finished second with 24.09%. Choctaw County’s Dayan Bilbo finished third with 12.35% and Pascagoula’s Isaiah Benn finished fourth with 5.48%. There were over 76,000 votes tallied this week!

Kerstin Moody, Belmont volleyball: Moody had 14 kills, 13 aces and 4 digs to lead Belmont to a 3-0 win over Baldwyn.

Telvin Amos, Lake Cormorant: Rushed for three touchdowns and threw for another in the Gators’ 32-15 win over DeSoto Central.

Kabe Barnett, Oak Grove: Only played one quarter, but completed 6 of 7 passes for 99 yards and two touchdowns in Oak Grove’s 43-7 win over Seminary.

Coleman Dowell, Lewisburg: Rushed for 183 yards and three touchdowns in a 45-14 win over Byhalia.

Robert Dumas Jr., Madison Central: Rushed for 149 yards and three touchdowns in a 42-19 win over Brandon.

John Ford, Sumrall: Racked up 390 yards of total offense and tossed four touchdown passes in a 41-14 win over Bay.

Bray Hubbard, Ocean Springs: Passed for 190 yards and four touchdowns in just one half of the Greyhounds’ 43-8 win over Hattiesburg.

David Humphries, Ocean Springs: Rushed for 124 yards and two touchdowns in the Greyhounds’ 43-8 win over Hattiesburg.

Kaden Irving, Gautier: Racked up 400 yards of total offense and passed for six touchdowns and ran for another in Gautier’s 52-41 win over Pascagoula.

Emory James, Louisville: Rushed 11 times for 177 yards and three touchdowns in a 41-7 win over Kemper County.

Jerry Johnson, Pearl: Racked up 243 yards of total offense with two rushing touchdowns and another through the air in the Pirates’ 50-13 win over Ridgeland.

Drey Lenoir, D’Iberville: Rushed for 71 yards and three touchdowns in a 48-26 win over D’Iberville.

Winn Navarette, North Pontotoc: Caught six passes for 141 yards, including a 69-yard touchdown that ended up being the game-winner in an 18-12 victory over Charleston.

Jordan Osborn, Senatobia: Rushed for 172 yards and four touchdowns in a 42-17 win over Water Valley.

Jeffery Johnson Jr., Murrah LB: Johnson had 16 tackles – including one tackle for a loss – and forced a fumble in Murrah’s 18-2 loss to Callaway.