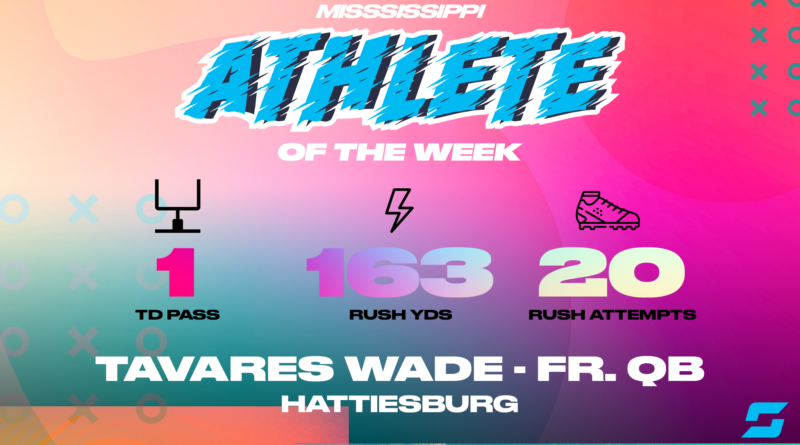 Congratulations to Hattiesburg quarterback Tavares Wade for being voted SBLive’s Mississippi High School Athlete of the Week for Aug. 23-29!

The freshman had a breakout game, running 20 times for 163 yards and throwing a TD pass in a 16-10 overtime loss to Petal.

Christopher Burnett, Yazoo City QB: Burnett threw for 257 yards and four TDs and ran for 56 yards to lead Yazoo City to a 34-33 win over Callaway.

Bray Hubbard, Ocean Springs QB: Hubbard was a one-man wrecking crew for the Greyhounds, rushing for four TDs and passing for two more to lead Ocean Springs to a 45-44 double overtime win over Clinton. Hubbard finished with 88 rushing yards and 205 passing yards.

Marlon Lindsey, West Jones QB: Lindsey was 16-of-29 passing for 229 yards with a touchdown and another score on the ground in West Jones’ 27-21 loss to Madison Central.

Dicenzo Miller Jr., Kemper County RB: Miller rushed 11 times for 73 yards and three TDs, caught three passes for 47 yards and a TD, returned three kicks for 67 yards and one punt for 34 yards to lead Kemper County to a 47-20 win over Leake Central.

Ryan Poole, Petal RB: Poole was the workhorse for Petal, running 28 times for 92 hard-won yards and a game-winning 10-yard touchdown to lift Petal to a 16-10 overtime win over Hattiesburg.

Mark Smith, Meridian QB: Smith threw for 154 yards and three touchdowns to lift Meridian to a 35-14 win over Philadelphia.

Khamauri Rogers, Holmes County Central CB: Rogers had 2 catches for 70 yards, 2 TDs, and 1 interception for 30 yards and a TD in a win over Greenwood.

Jerell Boyd, Holmes County Central RB: Boyd had 6 carries for 155 yards and a TD for the Jaguars in their win against Greenwood.

Brawner Cregeen, Corinth QB: Cregeen threw for 271 yards and 4 TDs on 8/11 passes, in addition to 1 rushing TD in a win over Saltillo.

Josh Sykes, Park Place WR: Sykes had 191 yards and 4 touchdowns on 6 receptions for the Crusaders in their loss to Central Hinds Academy.