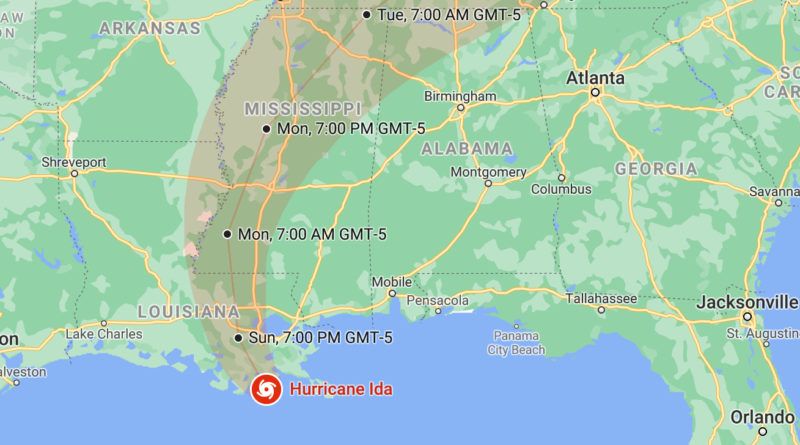 Editor’s Note: This post will be updated with game cancellations and other important information pertinent to Hurricane Ida as the story develops.

JACKSON, Miss. — Hurricane Ida made landfall near Port Fourchon, La. Sunday afternoon as a Category 4 hurricane with winds of 150 mph.

The projected path has the storm crossing the Mississippi state line and blanketing the Magnolia State in rain and hard winds for late Sunday and most of the day Monday.

The storm is set to batter South and Central Mississippi with thunderstorms capable of spawning multiple tornadoes, and is expected to cause major property damage, mass power outages and flooding in some areas.

Mississippi High School Activities Association Director Ricky Neaves said Sunday afternoon the association is monitoring the situation and would have an update on the status of next week’s games after the storm passes.

“We are anticipating there will be some parts of the state where we may not be able to play next week due to power outages or flooding,” Neaves said. “We just have to wait and see what kind of damage the storm does and we’ll reassess by Wednesday.”

He added that he hopes schools in the Jackson area and south will be able to resume playing as soon as next week, but said he’s committed to keeping the seasons alive for teams, regardless of the damage.

“We know there may be some schools that need money or other kinds of support to keep their season going,” Neaves said. “If that’s what it takes to keep them playing, we’ll make it happen.”

We will keep this post updated throughout the week with how Hurricane Ida is affecting high school sports in every region of Mississippi.

Tropical storm conditions are expected. As much as 10 inches of rain and between now and Monday afternoon with sustained winds between 45-60 mph and gusts of up to 85 mph as far north as Brookhaven. Conditions also favorable for tornadoes.

Storm Surge Warnings are in effect for Hancock, Harrison and Jackson Counties. Projections call for a surge from 5-7 feet in some areas. Tropical storm conditions are expected until Monday morning at the earliest, high sustained winds capable of causing structural damage to sturdy buildings, some with complete roof and wall failures. Widespread power outages are expected.

Covington, Forrest, Jones and Lamar Counties will remain under a flash flood watch through Tuesday morning. Heavy rainfall of four to eight inches is expected. Mass power outages and damage from winds are possible.

Jackson Mayor Chokwe Lumumba issued a state of emergency Saturday afternoon in anticipation of flooding from heavy rains and power outages stemming from expected wind gusts of up to 60 mph. Entergy Mississippi issued a warning Sunday afternoon that the hardest hit areas could be without power for a week or more.