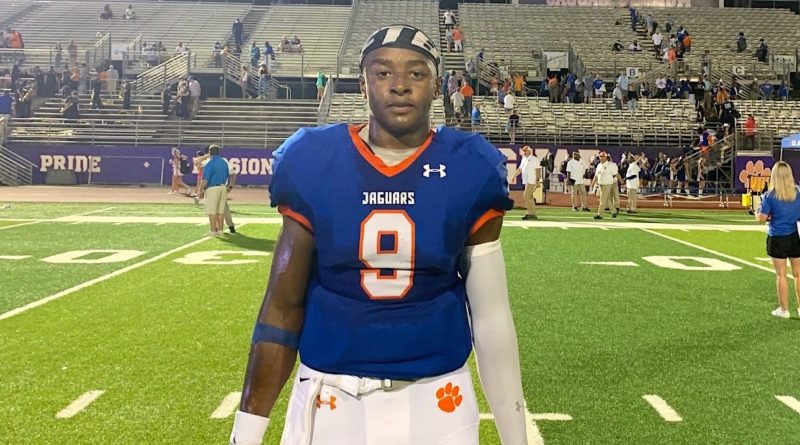 Behind the play of quarterback Vic Sutton, the Jaguars held off defending 5A champion West Jones 27-21 in The Jungle in a season opening Top 10 showdown on Friday night.

“Just glad to be 1-0. Hats off to West Jones they are a really good football team,” Collums said. “They got after us and played really physical. We’re happy for the win, but at the same we got to get better at sustaining drives and running the ball.”

Madison Central (1-0) couldn’t have asked for a better start to the game.

Jaguar defensive back Braxton Merritt intercepted a pass on the second play, and Madison Central capitalized on the turnover with a Robert Dumas 2-yard touchdown run on fourth down to take a 7-0 lead with 6:56 left in first quarter.

On the first play of their next possession, Sutton connected with Isaiah Spencer on a 38-yard touchdown to take a 14-0 lead with 5:13 left in the opening quarter.

The Jaguars extended their lead to 21-0 as Sutton connected with Blake Gunter on a 13-yard touchdown pass with 8:03 left in the second quarter.

West Jones responded with two touchdowns on a 8-yard run by Marlon Lindsey with 3:25 left and a 3-yard run by Kendorean Russell with 41 seconds left to cut the Madison Central lead to 21-14 at halftime.

After Russell intercepted a Sutton pass, Lindsey hit Matthew Nixon on a 4-yard touchdown pass for the Mustangs to tie the game at 21 with 2:13 left in the third quarter.

After forcing West Jones to punt, Sutton found Gunter again from 10 yards to give the Jaguars the 27-21 lead.

Sutton finished the night 10-of-18 passing for 117 yards with three touchdowns to lead Madison Central offensively.

“We were just taking what the defense gives us,” Sutton said. “They were in cover four basically all night and took advantage. We came out firing and then we got too comfortable. We’ve got to stay focused the whole game and we will get better.”

The Jaguars only gained 185 yards of total offense.

“Offensively, we came hitting in all cylinders in the first quarter and then we hit cruise control too early,” Collums said. “Got outside of the game plan, but we got to do a better job of getting the ball to our play makers.”

Lindsey was 16-of-29 passing for 229 yards with a touchdown and another score to lead the Mustangs (0-1). West Jones’ final drive to potentially win the game stalled on a holding penalty at midfield and a sack ended it.

“Both teams could’ve played better, but at the same time both teams played hard, and we came up short,” said West Jones coach Scott Pierson. “Marlon is a griddy kid and we go as he goes and he’s got to learn on the fly. This is going to sting for a while, but I like this team and come November, we will be ready.”