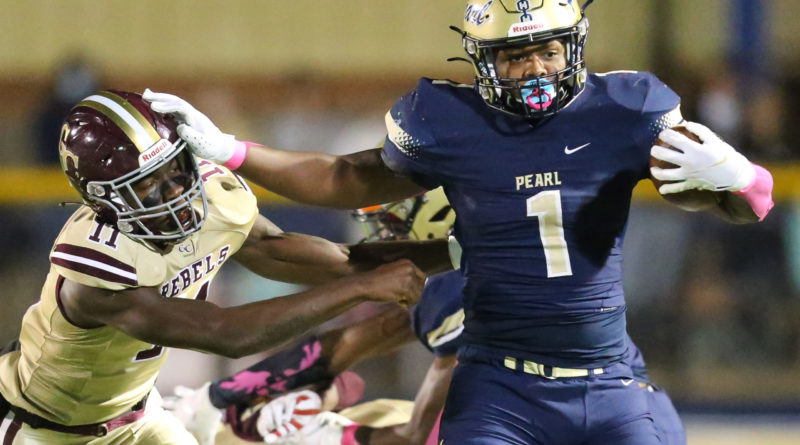 SBLive is previewing the top high school football teams in Mississippi ahead of the fall 2021 season. Here’s an inside look at the Pearl Pirates.

Pearl was a team on the brink of breaking through last year, and second-year coach Justin Hunter is hoping that momentum carries over into 2021.

Last season, the Pirates made Brandon eat dirt in their annual rivalry game and had close games against Northwest Rankin, which played for South State, and a playoff-bound Warren Central team.

“I’m extremely excited about what we have going on,” Hunter said. “We were inexperienced last year, but most of those guys are coming back. We also had a great off-season. COVID-19 didn’t stop us from having a full spring, so we got all 15 days in, and we’ve had a good week and a half of fall camp.”

The Pirates featured a potent rushing attack last year, and this season should be no different.

Losing a guy like Leo McIntyre up front is tough, but Hunter said he’s got a good group of younger guys who look ready to step up. That group starts with seniors Connor Foy and Jaylon Jackson, as well as junior Kendall Burkes and sophomore Reid Grantham.

The skill position guys should be familiar faces for Pirate fans.

Hunter has slid do-it-all back Jerry Johnson into the quarterback spot, hoping to capitalize on his athleticism.

“We struggled to get the ball in his hands last season,” Hunter said. “So we figured the best way to fix that problem this year is to snap it to him on every play. He’s adjusted well and done a great job of taking on that role. He’s just a freaky talented kid who had never played quarterback before, but he’s looked great in practice.”

Senior Jamari Thompson is back at tailback and should garner the bulk of the carries back there. Pearl also has a senior receiving duo of Alex Spires and Cody Armes on which Hunter feels he can rely on out on the perimeter.

Tight end Javion Alexander should also allow the Pirates to use some heavier sets and keep the defense honest at the same time.

Defensively, Pearl returns one of the best players in the region in lineman Jeremy Jackson. Jackson is all of 5-foot-11 and 295 pounds, but the guy his teammates call “Meatball” proved how indispensable he can be last year.

“He’s pound-for-pound our best football player,” Hunter said. “He’s the kind of guy that it’s hard to run around, but he also gets great pressure on the quarterback and causes problems in the backfield.”

Joining Jackson up front is fellow-senior Jalyn Nickelberry, who played a lot last year, and a couple of juniors Jabron Moore and Braxton Kemp. Don’t be surprised to see sophomores Zquan Coleman and Justin Knight get some playing time before the season is over.

Inside linebacker Tristan Carpenter returns as the leader of the defense, and Pearl will break in a couple of new faces at outside ‘backer with junior Harnoor Singh and Kiayon Jefferson.

In the secondary, Pearl returns starting safety Justice Moore, as well as both starting corners D.J. Hudson and Marcus Mosely.

Hunter said receiver Cody Armes will handle the kicking duties after a stellar junior season on the soccer field.

“We felt like we were right there last year in a couple of games that turned on one or two big plays,” Hunter said. “We have talked about that a lot this off-season when the guys were getting tired — is that extra effort to finish going to be the difference in one of those games?”