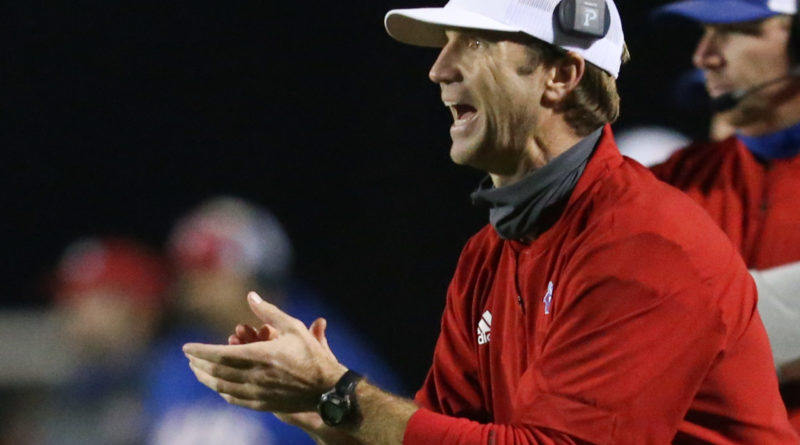 SBLive is previewing the top high school football teams in Mississippi ahead of the fall 2021 season. Here’s an inside look at the Warren Central Vikings.

It’s a new era for Warren Central as the football program makes the move to Region 3 and South State thanks to redistricting.

The Vikings are coming off a 6-3 season that ended in disappointment with a second-round loss to Clinton after a red-hot 5-0 start that included wins over traditional big-boys Brandon, Pearl, Germantown and Madison Central.

“I think along with everyone else, we were just happy to get the season in,” 11th-year Warren Central coach Josh Morgan said. “I was proud of our guys, our coaching staff and our team. We won some big ball games in a tough district and we were really only a play away there at the end against Clinton.”

The Vikings’ new chapter will begin with a bit of a rebuild, as Morgan must find a replace seven starters on each side of the ball.

That starts at quarterback, where Kentrick Thompson left a big production hole when he signed with Mississippi Delta Community College following his senior year.

In his stead, Morgan is turning the reins over to senior Hartley Sullivan, who has waited his turn and appears ready to lead the team.

“He’s been in the program and knows what we’re doing and what we’re asking of him,” Morgan said. “He won’t be quite the runner Kentrick was, but he has all the intangibles you’d like to see and he’s a student of the game who really understands how to play his position.”

The good news for Sullivan is that he’s got a great returning cast around him.

The Vikings have three third-year starters coming back in Dontavius Bell, Colt Lee and K.J. Miller, and Morgan thinks new starters Robert McBride and Brandon Snowden are ready to step into bigger roles.

“I’m looking for a big step up out of those guys,” Morgan said. “We have a chance to have a tremendous offensive line. They are all big and athletic and each of them has a chance to play at the next level.”

Junior Trey Hall is the Swiss Army knife on offense, and will likely spend time at tailback and receiver. Senior Timothy Thompson is also back after rushing for 315 yards on 75 carries with three touchdowns a year ago.

Jaevian Mims and Preston Lynch will be the top targets at wideout, having combined for 14 catches for 106 yards as juniors in 2020.

On defense, the Vikings must replace some key players from a defense that was more than a little salty. Warren Central lost six starters off a unit that gave up just 119 points in eight games.

The line returns a couple of bulldogs — juniors Roy Qualls and Demarcus Jones — that have a lot of experience, but Morgan is still looking for another end and a tackle headed into fall practice.

Senior linebackers Floyd Davenport and Jashun Simon are as solid as it gets, but depth could be a concern at the second level of the defense with the departure of A.J. Griffith, who transferred to Brandon during the off-season.

Morgan will likely have to play some skill position guys both ways in the secondary, but that’s the position group where the Vikings have the most work to do. You can’t just replace guys like Tevin Bell and Taylen Smith overnight, but the staff likes what they’ve seen out of Jaevian Mims and Jaylon Trisby at corner. Senior safety Jason Williams has emerged as one leader of the unit.

“We’ve got to be good on that side of the ball because we know it’s going to be a competitive region,” Morgan said. “We have a lot of respect for all those programs, and I’m sure they are going to want to beat us as the new guy on the block. It’ll be a dog-fight to get into the playoffs and we’re excited for the challenge.”