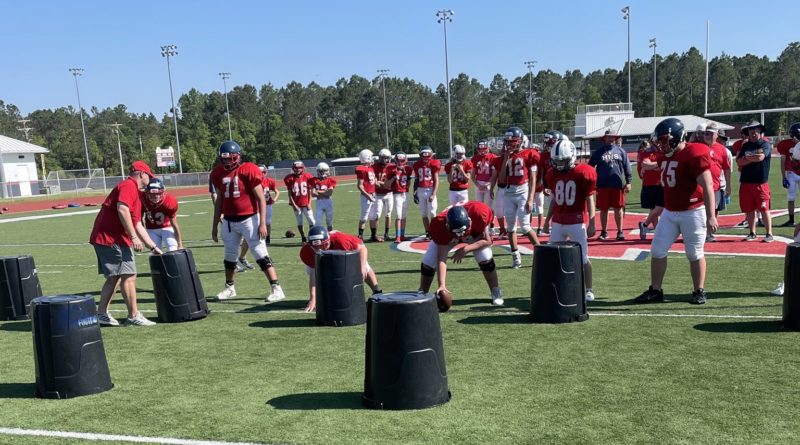 SBLive is previewing the top high school football teams in Mississippi ahead of the fall 2021 season. Here’s an inside look at the Hancock Hawks.

Last season is always going to be the “what if” year for Hancock after a slow start and key injuries gave way to a COVID-19 quarantine in the middle of the year.

The final record of 3-6 might look like a step back on paper, but coach Neil Lollar saw plenty to be excited about in the second half of the season.

“That was the positive that came out of that situation last year,” he said. “We got to see how everyone responded to the adversity and I thought we played really well in all four of those games after we came out of quarantine. Three of those teams went to the playoffs, and we went 2-2 in that stretch, including a big win over a really good Harrison Central team.”

Now, the goal is finding a way to keep that momentum going with a new cast of characters in key roles.

Pierre Fowler was one of a trio of tailbacks Hancock relied on last season, alongside departed seniors Chris Bernard and Wyatt Ladner. Cameron Miller played corner last year but will go both ways this season after showing so much promise at tailback late in the year.

They could both be in for big seasons if the offensive line can stay healthy.

Senior tackles Ryan Ladner and Da’kyre Smith are a year older and stronger, as are guards Ryder Island and Tyler Bennett. The newcomer up front is junior center Landon Dewitt, but he’s got great size at 6-foot-2 and 270 pounds.

After those guys, there’s a lot of new faces.

Sophomore receiver Todd Dedeaux has a great mix of size and speed and could be in for a breakout year keeping opposing defenses honest, but the staff is still looking for other receivers to step up.

One guy to keep an eye on is senior Joey Alligood, who has slipped into the tight end/H-back role and can do damage at both.

“For us, it’s about the quarterback making the right reads,” Lollar said. “Whatever it may be. That’s going to be critical for us. People have to go catch it and run it hard, but we’ve got to make the reads and get the ball to the right guy.”

The Hawks will break in a new starting quarterback in 2021, and we may end up seeing both senior Brandon King and sophomore Dylan Moran under center.

King has the most experience at the varsity level and is the younger brother of Mississippi State wide receiver Brodie King. Moran was the catalyst for Hancock’s recent success at the middle school and junior varsity level.

“We’re going to ask the quarterback to play a little different role for us this year,” Lollar said. “Both those guys give us a chance to be good with what they can do. Brandon is a little more athletic, but both of them have good size at 6-foot-2 and can throw the ball. We’re excited to see what each of them can do in practice and glad to have two guys there who can play.”

The Hawks have five returning starters on defense, but several of them were, or are now, two-way players.

Ryder Island and Da’kyre Smith will both pull double-duty on the line, manning the two end positions. Senior Triston Varnado is athletic and strong for 6-foot-1 and 220 pounds, and he’ll be asked to man the interior line position.

Braxton Dardar is the lone returning starter at linebacker, but the coaching staff is excited about sophomore Jeffrey Hopgood, another guy who was key for those middle school and junior varsity teams. Junior Jasper Talley will certainly be in the mix as well.

“We’re a little undersized at linebacker but those guys can bring it,” Lollar said. “They don’t look like much, but they are smart guys who can run and deliver a big hit.”

The secondary is half-settled going into fall practices. Cameron Miller is definitely going to start at one corner position, and junior safety Coby Kern is locked in after a solid sophomore season. The other spots are up for grabs, but one known quantity could be Fowler, who played well at corner in the second half of last season.

It’s a lot of turnover, but Lollar said he’s optimistic about all the young talent.

“Folks were asking me at the coach’s convention how good we were going to be this year,” Lollar said. “The answer is, I honestly don’t know. I’m pleased with where are at this point, but our success will probably be predicated on how quickly those 10th graders can fill those shoes and step up their play to the varsity level.”