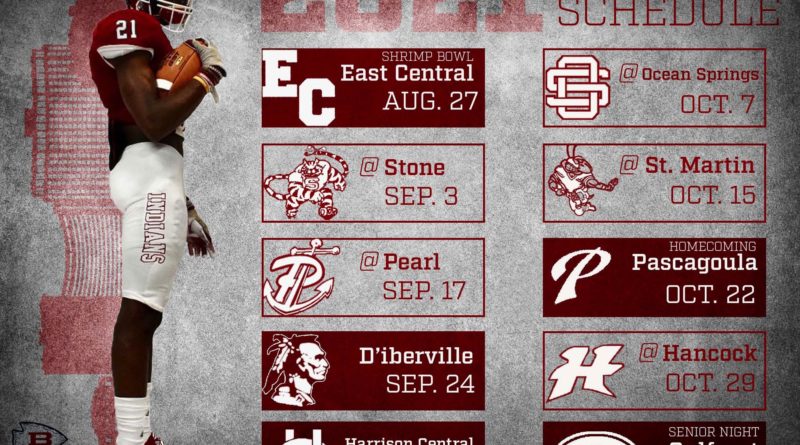 SBLive is previewing the top high school football teams in Mississippi ahead of the fall 2021 season. Here’s an inside look at the Biloxi Indians.

Going into the 2020 season with a slew of college-level talent, it looked like Biloxi was ready to take the coast by storm.

They started out quick with decisive wins over Vicksburg and Stone, but the season got derailed by a bad run of luck with Covid-19 and injuries at key positions. The Indians still managed to win six games, reach the playoffs and give eventual state champion Oak Grove Hell for two quarters in the first round.

Fourth-year coach Katlan French says his 2021 squad could be in for even more success, but it will require a couple of new faces to step up and fill the void left by that monster senior class from a year ago.

“We’ve had a good off-season,” French said. “Our kids are working hard and we’ve got a decent group. We’re inexperienced in certain spots and we feel pretty confident in others, which I’m sure is a lot like everyone else.”

Starting quarterback Tristan Pearson struggled with injuries for a second-straight season last year, but the good news there is that French saw what incoming starter Deljay Bailey can do. The sophomore played in seven games as a freshman last year, completing 43 of 69 passes for 645 yards with six touchdowns and four picks.

He’ll lead an offensive skill position group that includes another playmaker in Deon Hardin. The senior caught a team-high 22 passes for 453 yards and five touchdowns, despite the turnover at the quarterback position.

“We have a good group of three running backs, and we’re trying to spread the wealth. We lost our workhorse, K.K. Kendrick, but we’re excited about Deon — he’s the most decorated returning skill player and we’ll rely on him a good bit in the running and passing game.”

The strength of the Biloxi offense, and perhaps the whole team, is the offensive line. French returns four starters up there, including Gabe Brandon, Landen Davis, and Greyson Seymour.

Junior Bryson Pisarich also got a bunch of playing time at center last year due to injury, and he’ll keep a starting job after sliding over to guard. Adam Davis, a 6-foot-2, 255-pound senior who ended up starting the last four games of the season due to injuries on the line, is making the transition to tight end.

The biggest question mark for Biloxi is up front on defense, where the Indians are replacing several big-time players. R.J. Moss is a consensus top-10 type player at one of the defensive end spots and Braden Ratliff, who transferred from Oak Grove two years ago, showed promise in the final four games on the other end of the line last year.

The big challenge is replacing departed senior Thomas Patterson in the middle.

“We’ve had a couple of different guys step up to fill that role,” French said. “And it’s a big hole to fill, because Thomas was so intense. We’re going to miss him and his productivity, but we feel like we’re still solid in the middle of the field because of guys like  Ethan Dematos and Augie Tremmell.”

The secondary is better than solid, with senior Terrance Simmons capable of playing corner or safety and juniors Damaryion Fillmore and Aiden Harrison back. Gulfport transfer Tedarrius Crawford will also likely play a big role, along with sophomore Dayshawn (Day-Day) McGee.