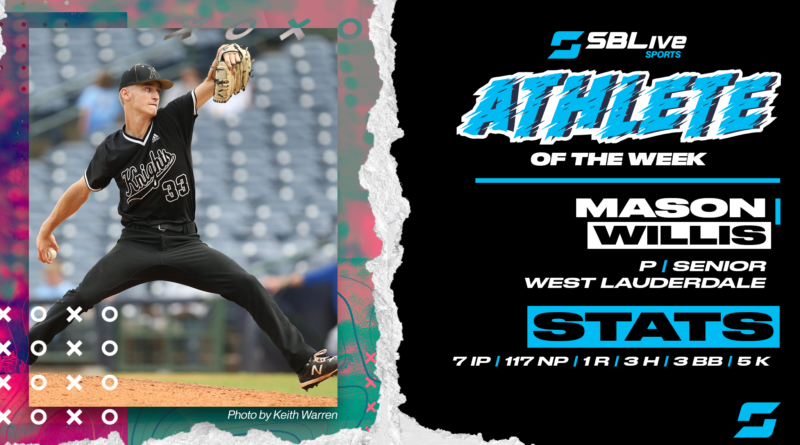 Congratulations to West Lauderdale senior Mason Willis for being voted SBLive’s Mississippi High School Baseball Player of the Week for May 31-June 6!

The senior hurled a gem in Game One of the 4A State Championship series, beating Sumrall 2-1. He threw 117 pitches in seven innings, allowing one run on three hits and three walks with five strikeouts.

Mason ran away with this week’s honor, receiving 64.39% of the total vote.

Here are the other athletes who were nominated for May 31-June 6:

Noah Foster, Tupelo Christian: Impacted both games and earned MVP honors in the 1A State Championship. He tripled and drove in two runs in Game One and singled in two more runs in Game Two. Also threw a complete game shutout in Game two with eight strikeouts and two walks.

Brayden Montgomery, Madison Central: Made the choice for 6A Championship Series MVP easy by making a big impact on both wins over Northwest Rankin. He threw 101 pitches in 5.2 innings on the mound in Game One, allowing two runs on one hit and five walks with 15 strikeouts. He went 2-for-2 at the plate with an RBI and a run scored in Game Two and walked four times in the series.

Jackson McCoy, Booneville: Won MVP honors for his efforts in the 3A State Championship series, going 2-5 in the two-game series with a home run, three RBIs, three walks and three runs scored. He also pitched a complete game to get the win in Game One, allowing two earned runs on five hits and three walks with eight strikeouts in seven innings of work.

Ted Page, Taylorsville: Earned MVP honors in the 2A Championship series for his work on the mound. In Game One, he went three innings in relief and struck out three batters without allowing a hit or issuing a walk in three innings. In Game Two, he allowed one hit in a six-inning start with six strikeouts and one walk.

Matthew Roncalli, Saltillo: Earned MVP honors in the 5A State Championship series by pacing the Tigers offensively against Pascagoula. He went 6-for-11 at the plate in the series with a triple and two RBIs.