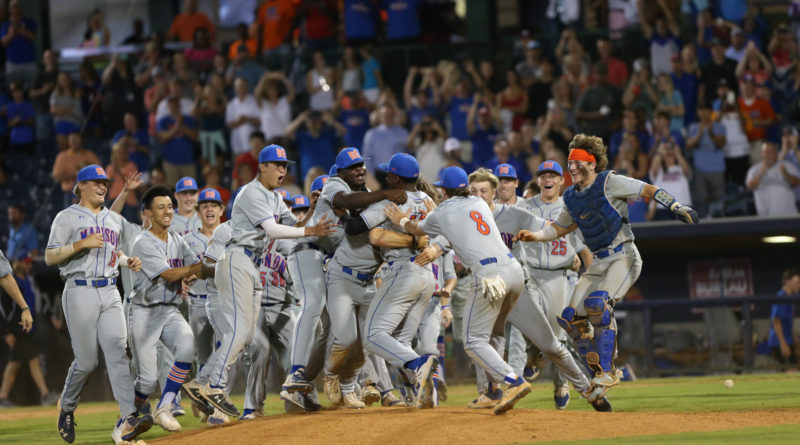 PEARL — There’s been a lot of talk about Madison Central’s baseball team being ranked No. 1 or No. 2 nationally in this poll or that poll, but there’s only one designation that mattered to the Jaguars Saturday night at Trustmark Park — MHSAA Class 6A Champions.

The Jaguars put a bow on one of the best seasons in recent memory with an 11-1 win over cross-town rival Northwest Rankin to sweep the best-of-three championship series.

After grinding out a 3-2 win in walk-off fashion Friday night, the Madison Central lineup exploded for 11 runs on 12 hits and eight walks to get the 10-run rule win in five innings Saturday.

“I think if you go back and look at our season, there’s been a couple of instances where we won one or two-run games and came back the next night with a blowout win,” Madison Central coach Patrick Robey said. “So I thought we would respond tonight and that’s what you saw. We hit top to bottom and I couldn’t be prouder.”

The Jaguars have been ranked atop the SBLive Mississippi Power 10 Poll since the season began, and it was easy to see why Saturday.

Every single hitter in the lineup contributed at the plate.

Leadoff man Gatlin Sanders reached base four times on two hits and two walks and scored three runs. Catcher Ross Highfill went 3-for-3 with a double, a walk and an RBI.

Hunter Hines drove in a run with a sacrifice fly and cleanup hitter Braden Montgomery — the series MVP who struck out 15 batters in his start Friday night — went 2-for-2 with two walks, scored and drove in a run.

“I told y’all last night I thought the bats would wake up tonight,” Montgomery said, still grinning and holding the state championship trophy. “And that’s exactly what happened. This team responds to adversity, and it did again tonight.”

The Jaguars (34-2) plated two runs in the first inning and two more in the second, which seemed like a moral victory for Northwest Rankin after they loaded the bases with less than two outs in both frames.

But the big inning game in the fourth after the Jags loaded the bases on a couple of singles and a hit-by-pitch with nobody out. Creek Robertson drove in a run with a sacrifice fly — one of his three RBIs — before Jackson Mize busted the game open with a two-run double down the left field line that gave Madison Central an 8-1 lead.

The moment was especially memorable for Mize, a senior who has been in and out of the lineup over the course of the season.

“It’s a moment I don’t think I’ll ever forget,” Mize said. “From the moment it left the bat I knew it was a big hit, and then when I got to second and looked back to see both runners scoring and my teammates pointing at me… it’s just a real special feeling to know I helped us get that much closer to winning.”

Sanders and Highfill drove in two more runs in the fourth and Robertson drove in the final run in the fifth to secure the 10-run lead.

Ranard Grace (10-0) pitched the whole game for Madison to get the win. He went five innings and gave up one run — on an RBI single from NWR catcher Brady Thomas in the first — on five hits and two walks with three strikeouts.

Grace, Montgomery and Nation combined to allow just three runs in 12 innings in the series.

Bringing the title to Madison was especially gratifying for Robey, who won a championship in his sixth year at the helm of the program.

“Part of me is just glad it’s over,” he said, half smiling. “Because there’s pressure on everyone, but there’s even more pressure on me because there was no room for error. Sometimes you feel like you’re holding up a wall and the only way you can go is down. But my wife gave me some great advice and told me just to enjoy this while it’s here, because this team has the kind of talent that comes along so rarely, maybe once in a lifetime.”

The loss ended what, up until the championship series, had been a dream season for Northwest Rankin (27-9).

The Cougars had thrived in the kind of high-anxiety environment that oozed from the packed stands at Trustmark Park, but it just felt like the air came out of the tires after Friday night’s dramatic finish.

“You’ve just got to tip your cap to those guys,” NWR coach KK Aldridge said, nodding towards the Madison County celebration on the other side of the field. “They may have the best offense ever assembled for a Mississippi high school team… certainly the best I’ve ever seen. You give them any kind of opening, and they are going to blow it wide open. And we gave them too many openings with with walks and wild pitches, base running  and mental mistakes.”

NWR senior Luke Lycette drew the start and suffered the loss, allowing four runs before leaving the mound in the second inning. Powell Ingram relieved him and gave up six runs in 2.2 innings of work. The two, three, four and five-hole hitters each tallied a hit, but none went for extra bases.

The Cougars’ staff ace Nick Monistere, a junior Southern Miss commit, was slated to start Game Two but didn’t because of a pitch-count snafu.

The Northwest Rankin coaching staff thought he only threw 25 pitches in relief Friday night, but review of the game film revealed he had thrown 26. MHSAA rules only allow a player who has thrown 25 or fewer pitches to throw again the next day.

“I hate that it happened,” Aldridge said. “But it’s like I told our guys: we were going to have to win one game against them without Nick either way, so it might as well be this one. If we had been able to force a Game Three, we would have been able to bring him back. But that’s on me. I’m the head coach and it’s my responsibility.”