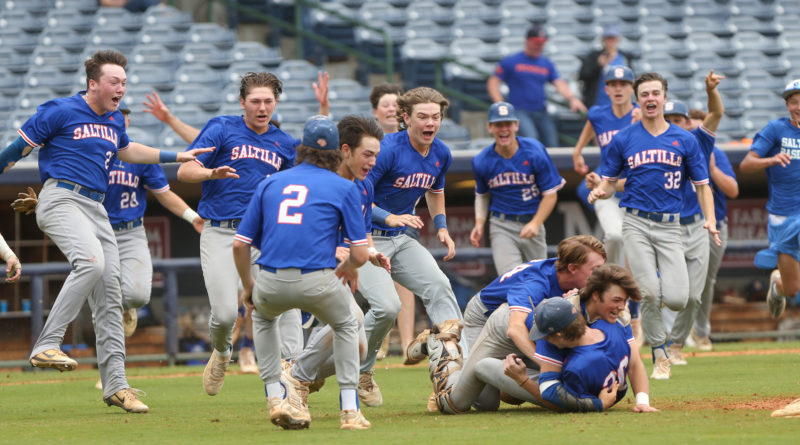 PEARL — Saltillo right-hander Drake Douglas was looking for redemption in the winner-take-all Game Three of the 5A Championship series after a less-than-stellar performance in Game One.

Luckily for the Tigers, the sophomore delivered.

Douglas was dominant in the final four innings as Saltillo clinched the 2021 MHSAA 5A State Championship with a 9-5 win over Pascagoula in front of a packed house Saturday morning at Trustmark Park.

It was the first state championship for the program since 1972.

“It’s been a long time since we’ve had a championship in baseball,” Saltillo coach Eric Reynolds said. “Those guys right there have put in the work, believed in our system and bought in completely. It’s all them — we give them the stuff to do every day, and they came to work every day ready to go.”

Douglas was the hero of Game Three. He relieved Tiger starter Ian Dillon in the fourth inning with the game tied 5-5 and completely shut down the potent Pascagoula offense over the final four innings.

After giving up six runs (four earned) in one inning of work Wednesday, the sophomore retired 13 of the final 14 Panther hitters with one strikeout in Saturday’s finale.

“It was a big bounce-back game for me,” Douglas said. “I didn’t do so well in the first game. I struggled a little bit with control. But I switched something up with my delivery and it worked. I tried to stay more level with my head instead of jerking it, which was making everything come in high. Stuck with that, and it worked.”

After Douglas worked out of the jam in the top of the fourth, the Tigers broke the 5-5 tie with three runs in the bottom of the inning. Mason Easterling reached on an error, advanced to second on Matt Roncalli’s single and came around to score on another throwing error. Luke Wood delivered an RBI single and Ethan Turner made it 8-5 with a sacrifice fly.

The Tigers added one more insurance run in the sixth on Ben Webb’s pinch-hit RBI single, but they didn’t end up needing it.

Douglas (9-3) got a fly out to left, a fly out to center and caught a hard come-backer to cinch the game and start the dog-pile near the mound.

Roncalli earned series MVP honors behind the plate for Saltillo. He was 2-for-4 with an RBI Saturday and went 6-for-11 and knocked in a pair of runs in the series.

“We have worked from every pitch and hit and  batting practice all year for this moment right here,” Roncalli said. “Three years ago when this senior class were sophomores, we lost to Lafayette in North State. That gave us the something to play for. It brought us together. We’re a family, we play like it and this one is for the city of Saltillo.”

Pascagoula sophomore Brayden Scott suffered the loss for the Panthers (22-18). He gave up eight runs (six earned) in 3.1 innings of work. Francisco Solivan pitched well in relief, giving up just one run on three hits and one walk in 2.2 innings, bu the Panthers couldn’t ever get the bats going against Douglas to get back in it.

Josh Forsman led the way for the Panthers defensively, driving in two runs with a double in the fourth.