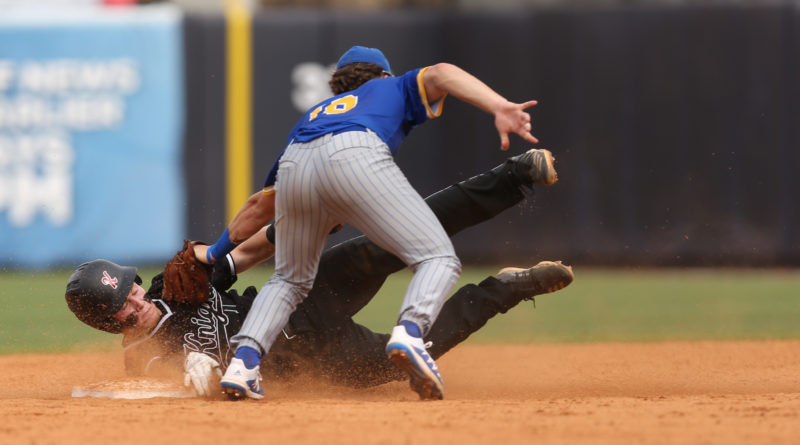 PEARL — West Lauderdale caught all the breaks at just the right time.

The Knights scored two runs in the bottom of the sixth inning to get past Sumrall 2-1 in Game 1 of the MHSAA Class 4A State Championship series at Trustmark Park on Friday afternoon.

“I thought we had a really good approach at the plate — even with us hitting the ball really hard right at them,” West Lauderdale coach Jason Smith said. “But I told the guys to believe we were going to get a break before the end of the game, and we did. Mason Willis pitched his tail off and gave us a chance to win.”

The Knights’ two runs in the sixth came on an RBI single to left by Brooks Buchanan, and Jackson Parker scored on a throwing error on a pickoff attempt at second base.

“We weren’t catching any breaks early on, and I think in the sixth everything went our way,” Smith said. “We put some pressure on them and we were able to capitalize on a few things and found a way to win.”

“I gave up that one run in the first, but I kept locating throughout the game and kept the ball down in the zone,” Willis said. “My curveball was working all game I could throw in any count. Once the offense finally got going in the sixth I knew we were fine.”

Willis retired 19 of the last 20 batters he faced to end the game.

“He has pitched in a lot of big ball games for us and knew what to expect coming into the game,” Smith said. “He does a great job of mixing up pitches and keeps teams off balanced and he did that tonight.”

Sumrall’s only run came in the bottom of the first inning on an infield single by Cade Dedeaux. Jones Junior College signee Kros Sivley (8-3) took the loss for the Bobcats, tossing six innings and allowing four hits. He walked five and struck out six.

“Kind of heartbroken, but glad it’s just one game. They got the breaks, and we didn’t,” said Sumrall coach Andy Davis. “Kros pitched a heckuva game, but it’s deflating we were winning all the way to the end, but I don’t think we played well at all.”