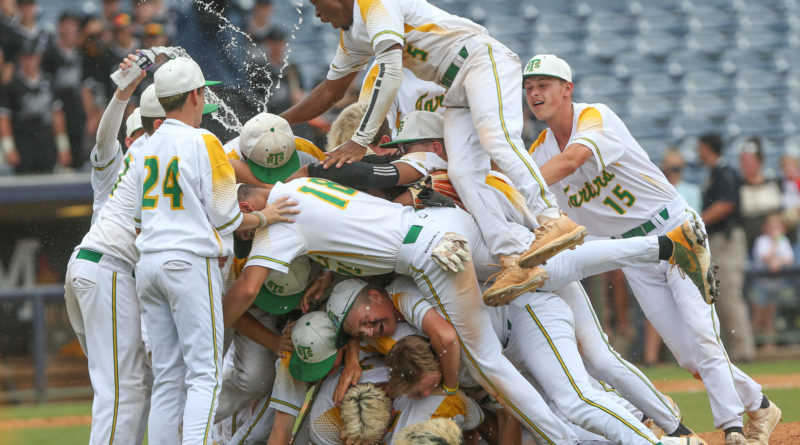 PEARL — The size or shape of the ball doesn’t seem to matter: when it comes to team sports, the boys from Taylorsville are probably better at it.

The Tartars celebrated their second state championship of the year Friday afternoon at Trustmark Park after beating East Union 8-0 to sweep the MHSAA 2A Baseball title series. They won the football state championship back in December.

“We set this as our goal when we started out this year,” Taylorsville coach Dusty Hillman said. “We wanted to win a football championship and a baseball championship in the same year. It had never been done at Taylorsville, and we got it done. This group of guys knows how to win and they know how to compete, and it doesn’t matter if you’re talking football, basketball or baseball or whatever, they are going to compete and they are probably gonna to win.”

The Tartars (28-9) capped their season Friday in what should be, by now, a familiar formula.

Senior Tedrick Page went six scoreless innings on the mound — after going four in Wednesday’s 5-1 Game One win — before Aiden Moffett came into get the final three outs.

Page, who was named MVP of the championship series, officially gave up two hits with six strikeouts and one walk. One of the two hits he gave up could have easily been tagged an error, but his performance was a marvel regardless.

“What do you say about Tedrick Page?” Hillman said. “He gave up no hits in four innings in game one, then comes out and starts game two and, in my book, he gave up one hit and one error. You can’t ask anything else from a senior. A couple of big RBIs from Ty Keyes, but these kids they worked their tails off.”

Page’s final line from the series was no runs allowed on two hits and two walks in 10 innings of work.

“I just tried to remember what coach told me the first day I pitched in a game a couple of years ago,” he said. “They always told me just to throw strikes and fill up the zone. So I just concentrated on staying ahead in the count and hitting the mitt.”

While Page was stumping East Union (29-7), the Tartar offense went to work.

University of Houston commit Karson Evans got things going with an RBI sacrifice fly in the first.

In the third inning, it was the reigning 2A Mr. Football Ty Keyes who provided the big hit. He connected on the 1-0 pitch and scorched a ground ball into left field to bring home Cedrick Beavers and Kelby Jordan.

The lead grew to 4-0 in the fourth when Dereco Crosby — a 2020 MAC All-State selection in football — walked, stole second base and came home to score on a Beavers double down the right field line.

Ford Matthews drove in two more runs with a big two-out single in the fifth, and Evans and Keyes both came in to score on a throwing error in the sixth.

Moffett gave up a single and issued a walk in the seventh, but struck out Thad Bell and got Caleb Johnson to pop out to shallow right to end the game and send the Tartars into celebration mode.

The lone bright spot for East Union was the return of senior pitcher Carter Phillips, who started Game One Wednesday before taking a hard come-backer to his left ear off the bat of Keyes in the first inning.

Carter was taken by ambulance to an local emergency room, where he received stitches but was ultimately cleared to play in Friday’s game. Carter relieved Urchin starter Rudy Baldwyn in the fifth and gave up two earned runs on three hits and three walks over the final two innings.

“I wanted to be out here with my team, even if I couldn’t play,” Phillips said. “So to be able to come out here and get into the game and compete was just surreal. It really felt like God was looking out for me. They told me if (the ball) had hit two inches higher, I probably wouldn’t have been able to even be here today.”

Chris Clayton and Ben Basil recorded the only hits for East Union. The Urchins managed just four hits in 12 innings in the series.