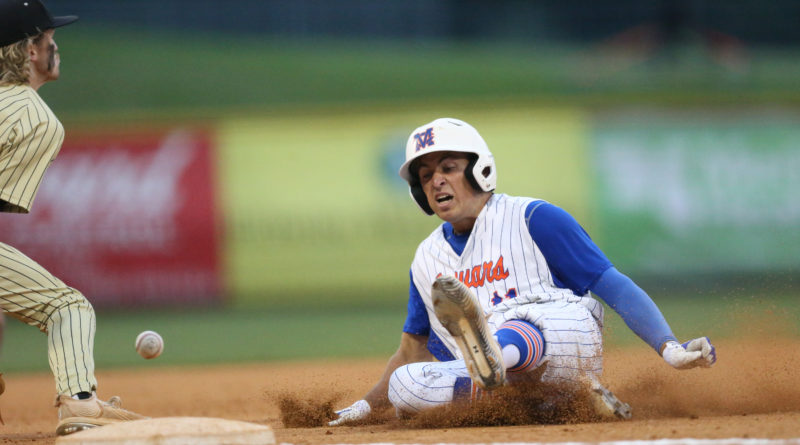 Jaguar ace Braden Montgomery performed about as well everyone has come to expect, but his pitch count was up and the Jaguars trailed South State Champion Northwest Rankin 2-0 headed to the bottom of the sixth.

Madison got two runs in the bottom of the sixth to tie the game, then walked it off in the seventh when a Northwest Rankin throwing error allowed the winning run to come home, setting off a wild celebration from the usually reserved Jaguars.

“I think you saw a lot of emotion from us tonight because we always want to beat those guys,” Montgomery said after, nodding his head towards the Northwest Rankin dugout. “We don’t want them to be able to say anything to us, so it gives us that extra motivation.”

After Friday night, it’d be an upset if anyone has any emotions left in the tank.

In what was, so far, the best baseball game of the week, the Jaguars pulled their 33rd win out of the fire and salvaged a gem of a start from their star pitcher.

Montgomery, the Stanford signee, came out firing early and struck out eight batters in the first three innings without allowing anyone to reach base.

But the Cougars got the lead in the fourth inning after the big right-hander struggled with his command when a steady rain started to fall. He issued back-to-back walks and allowed a run to score on a wild pitch before getting out of the jam.

Patrick Robey and the rest of the Madison Central coaching staff were chirping from the dugout for the umpires or grounds crew to delay the game, which they did, but only after Montgomery worked out of the jam.

“It was frustrating,” Montgomery said. “It was hard to keep my composure because the rain was definitely affecting my control, but I just had to gut it out.”

After a 32-minute delay, play resumed with the Cougars leading the Jaguars 1-0 in the bottom of the fourth.

That score held until the sixth, when the Cougars added an insurance run on Brady Thomas’ RBI double down the right field line that scored Nick Monistere from second. It was Northwest Rankin’s only hit off of Montgomery, and it put the Cougars ahead 2-0.

But it all fell apart for Northwest Rankin in the sixth.

Cougar starter Blake Summerlin beaned Madison Central leadoff hitter Gatlin Sanders and issued a five-pitch walk to Ross Highfill to put two men on with nobody out. That prompted NWR coach K.K. Aldridge to turn to Monistere, the team’s ace, to get out of the jam.

Instead, Hunter Hines blasted a RBI double off the wall in left-center that scored Sanders, and pinch runner Tom Lee came home on a wild pitch to tie the game, 2-2. Madison Central nearly took the lead, but Monistere struck out Beau Bryans looking on a 3-2 fastball with the bases loaded to preserve the tie.

Madison Central turned to Connor Nation to get the last out of the sixth, and he stayed on to pitch a scoreless seventh. He struck out designated hitter Ryan Herbison and let out a huge roar to go with the Tiger Woods-esque fist pump.

Jake Cook led off the bottom of the seventh for Madison Central with a walk against reliever Powell Ingram, and advanced to second on Gatlin Sanders’ fielder’s choice groundout. The Cougars intentionally walked Hunter Hines to get to Montgomery, who chopped one over the pitcher’s mound and led to the errant throw that cost Northwest Rankin the game.

It was a gut-wrenching loss for the Cougars, who now need to beat the top-ranked Jaguars twice in two days to clinch the state title. Blake Summerlin pitched so well, allowing two earned runs on one hit and four walks with two strikeouts.

“I can’t tell you how proud I am of Blake Summerlin and the way he pitched tonight,” Aldridge said. “I know there are no moral victories at this point, but we asked him to go out there and give us a chance and that’s exactly what he did. He’s been a senior leader for us this year and I couldn’t have asked any more of him tonight.”

To make matters worse for Northwest, there was a discrepancy over how many pitches Monistere threw in the sixth inning. KK Aldridge said he thought Monistere had thrown just 25 pitches, and Madison Central argued that he threw 28. The stats kept by the television crew broadcasting the game said it was 26 pitches, but they were set to do a recount by watching the game film late Friday night.

If it was over 25, the Cougars ace would not be eligible to pitch in Saturday’s Game Two.

“We were all in with Braden tonight,” Madison Central coach Robey said. “We had a couple of guys we felt good about that could come out of the pen tonight and we ended up going with Connor Nation. But it takes a whole lot more than two guys to win this thing.”