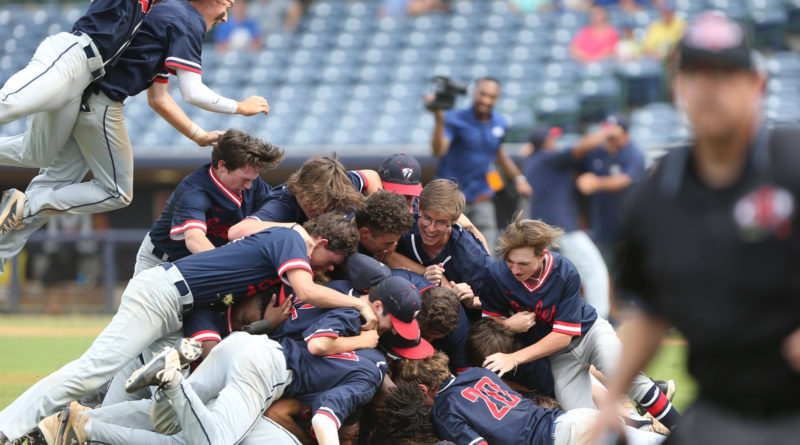 PEARL — Noah Foster has allowed himself to daydream about bringing a second MHSAA State Championship home to Tupelo Christian, but even he couldn’t have imagined the mark he left on Thursday’s championship game.

The senior pitched a complete-game shutout and drove in three runs in the Eagles’ 4-0 win over Resurrection Christian that clinched the sweep in this best-of-three 1A title series.

“No way man, I could never have imagined it playing out like this,” Foster said, still grinning ear-to-ear. “I’m glad I was able to do my job and help the team.”

He certainly did that.

Foster went 3-for-3 with an RBI and scored a run in the series-opening 5-2 win Tuesday afternoon, then turned in Thursday’s performance.

Tupelo Christian coach Drew Dillard called it was the most complete pitching game of the season for Foster, who consistently hit the outside corner and came up with several big strikeouts to preserve the shutout.

“He’s primarily our shortstop, but he’s a pretty good pitcher and he’s been a leader for us this year,” Tupelo Christian coach Drew Dillard said. “When he’s on the mound, he’s right there in the middle of the field, so we’ve got our best defender fielding all the bunts and making plays. I’m glad we were able to hit the ball and give him the support he needed to get it done. Everyone did their jobs and this was a total team win.”

Foster was far from the only hero — just about everyone contributed Thursday for Tupelo Christian (25-10), which picked up two runs in the third inning and two more in the sixth.

Khi Holiday walked and scored a run and made a huge defensive play when he threw out a runner trying to go first-to-third on a single in the second inning.

Jon Paul Yates singled twice and came around to score on Foster’s two-RBI single in the bottom of the sixth.

It was the third post-season series sweep for Tupelo Christian, which handled business against H.W. Byers and Vardaman before going to Game Threes in the third round and the North State Championship against Biggersville and Pine Grove, respectively.

Resurrection starter Max Askew was Thursday’s hard-luck loser. He gave up two runs (one earned) on five hits and a walk in 3.1 innings.

J.T. Schnoor relieved him and worked out of a two-on, one-out jam in the fourth inning. He held the potent TCPS offense at bay until Foster’s single gave the Eagles two big insurance runs.

But Resurrection (27-7) couldn’t ever come up with the timely hit off of Foster. They banged out eight hits — all singles aside from Joe Scarborough’s double — but stranded nine runners.

“I thought we hit it well in the whole series, really,” Resurrection coach Johnny Olsen said. “We just couldn’t string them together the way (Tupelo Christian) did, and that’s what got us, but I think this will be a learning experience for this group. We are losing one senior, Will Clemens, but the rest of these guys are going to come back in the fall and we’re going to really hit the weight room and try to get back here.”