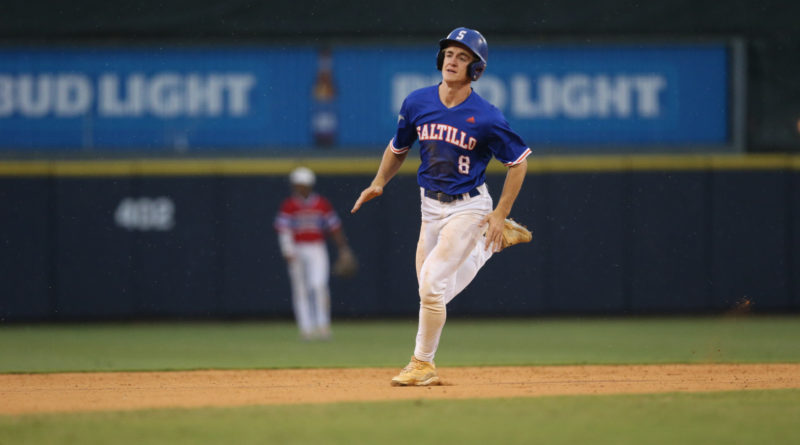 PEARL — Saltillo got one of the most disappointing pitching performances of the season in the MHSAA 5A Baseball Championship Series opener Tuesday night.

In Thursday night’s Game Two, it got one of the best.

Junior Ben Webb pitched a complete-game, one-hit shutout to give the Tigers the 4-0 win over Pascagoula and even the best-of-three series.

“If you look back at our season, you’ll see this isn’t out of the ordinary for us,” Saltillo coach Eric Reynolds said. “We’ll have three or four good games and then we’ll get a game like we had Tuesday night. But just knowing our team, I knew we would respond.”

Thanks to Webb, they did.

The lefty kept Pascagoula’s hitters off-balance and got every big out when he needed it. He pitched around four walks, two hit batsmen and one fielding error. He has a reputation as a pitch-to-contact type guy, but struck out seven Thursday.

“I think God was doing some real work tonight,” Webb said. “But we won this game as a team. Nothing I did mattered if we didn’t get those four runs.”

The Tigers (25-11) took the lead in top of the first inning and never looked back. Matt Roncalli led off the game with a single and Evan McCarthy followed with a triple to score one run. John Bucy Long added another single to bring McCarthy home and give Saltillo the early 2-0 lead.

They picked up another run in the second when Roncalli tripled on a line drive that got past the center fielder and scored on a McCarthy groundout.

The final run came in the sixth inning on Daniel Meeks’ second double of the night, which scored Drake Douglas all the way from first base.

Roncalli finished with a game-high three hits in four trips to the plate.

Freshman Griffin Wells got the start for Pascagoula and was shaky out of the gate — giving up the two runs in the first before recording his first out.

But he settled down after the second inning and put zeroes on the scoreboard in the third fourth and fifth inning. He gave up seven hits and walked three in six innings of work.

Rhodes Randle picked up the only hit for the Panthers (22-17) in the fourth inning.

“(Webb) pitched extremely well,” Pascagoula coach Richie Tillman said. “They jumped on us early and did what they needed to do after that first game, so you just have to give them credit.”

Tillman added that he hadn’t made a decision on who would start Saturday’s Game Three. Saltillo will send senior Ian Dillon to the mound.