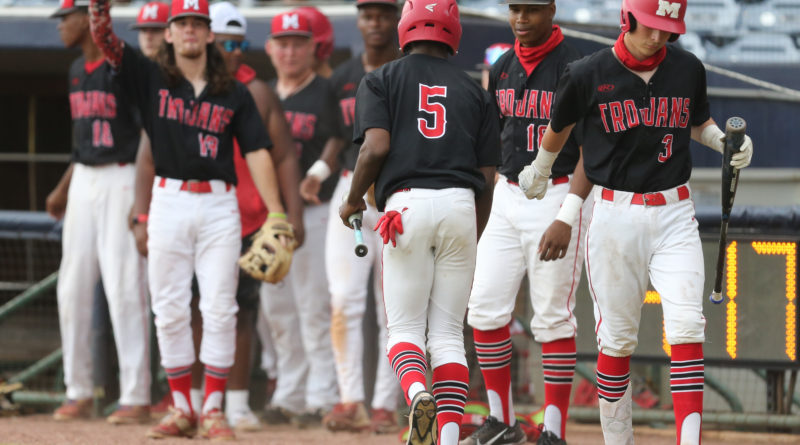 PEARL — Magee couldn’t have asked for a better start to the MHSAA 3A Baseball Championship series.

The Trojans jumped out to an early lead and held on to beat Booneville 6-3 in Game 1 of the MHSAA Class 3A State Championship series at Trustmark Park, and only burned one of their three best arms in the process.

“We started out hot with the bats and seeing the fast ball really well,” said Magee coach Allen Eubanks. “Adam May pitched well enough for us to win and glad we got Game 1.”

Cayden Bridges led off and ripped one into the gap for a triple on the first pitch of the game. Chandler Pittman had an RBI groundout, Jordan Magee and Banks Teater had RBI singles before Doc McLaurin’s two-run double.

Pittman scored on a groundout in the top of the second inning to give Magee a 6-0 lead.

May (10-1), a Mississippi Gulf Coast CC signee, tossed a complete game for the Trojans giving up five hits, three earned runs and struck out seven.

It wasn’t like Booneville didn’t barrel up the ball — the Blue Devils got doubles out of John Adam White and Ben Davis, and could have had more if not for several fantastic plays from the Magee defense. Chandler Pittman made a backwards, diving catch in center field that saved at least one run, and Jordan Magee finished it off with a great back-hand stab and a long throw to first for the next-to-last out.

“It wasn’t my greatest game,” May said. “I had some struggles in the middle innings, but I came back and did what I had to do, and defense played great behind me. I was confident with the big lead — I just had to throw strikes.”

Jordan Magee had three hits to lead Magee offensively. Doc McLaurin had two doubles for the Trojans.
Booneville scored two runs in the second inning on an RBI double by John Adam White and an RBI single by Hayden Donahue.

“The first inning is what cost us,” Booneville coach Kevin Williams. “Magee is very athletic, and you can tell they’ve been here, and we were nervous to start. We had missed opportunities and now we have our backs against the wall, but our guys will come back and be ready.”