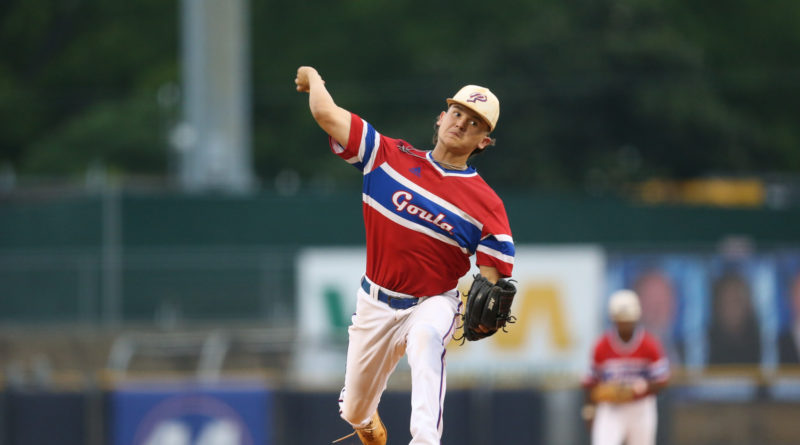 The Panthers took advantage of Tiger mistakes early, weathered a 55-minute rain delay and got a great pitching performance from sophomore Brayden Scott to take a 1-0 lead in this best-of-three MHSAA 5A Baseball Championship Series.

Game Two is set for Thursday night at 7 p.m.

The first 10-run rule win in any class of the championship series came from the unlikeliest of participants. This was the same Panther team that finished third in its region and only advanced to this stage after a seventh-inning rally in a 5-3 win over West Jones in the rubber match of the South State Finals.

“We’re a long way from a state championship,” Pascagoula coach Richie Tillman said. “We’ve got one game to play on Thursday and we’ll see how that goes. But this team has gotten better and better as the season has gone on. Tonight, we got a better performance on the mound and that was the difference.”

Scott was excellent. He went six innings and gave up just one run on five hits and two walks with four strikeouts.

The Panthers scored two runs on one hit, two walks, a hit-by-pitch and a Tiger fielding error in the first. They picked up four more in the second and took a 6-0 lead into the third inning.

Saltillo answered in the sixth when Jake Prather tripled and came home to score on Matt Roncalli’s RBI single, but then the rain started to fall.

The umpires finally called for the tarp between the top of the third and the bottom, and the game went through a 55-minute rain delay.

It didn’t seem to bother Scott at all. After avoiding big trouble in the third and resting for an hour, the young right-hander went back out and put up four more zeroes on the board.

“It was really just the fastball that was working for me,” he said. “I lost the handle on a couple of breaking balls when the ball got wet, but the fastball was there for me all night.”

The Pascagoula offense went back to work, too. The Panthers picked up two more runs on back-to-back RBI singles from Griffin Wells and Josh Forsman, then Sean Smith nearly cleared the bases with a ground-rule double. His blast to deep left with the bases loaded was initially ruled a grand slam, but it still drove in a couple of runs and gave Pascagoula the 10-1 lead.

Keilon Parnell and Houston Johnson laced back-to-back, one-out triples in the sixth to give the Panthers the 11-1 lead — all they needed to finish the game with a 10-run rule win.

“We know they are a better team than what we saw today,” Tillman said as he looked across the field at the Saltillo dugout. “We took advantage of some mistakes by them early, but this series is a long way from over.”