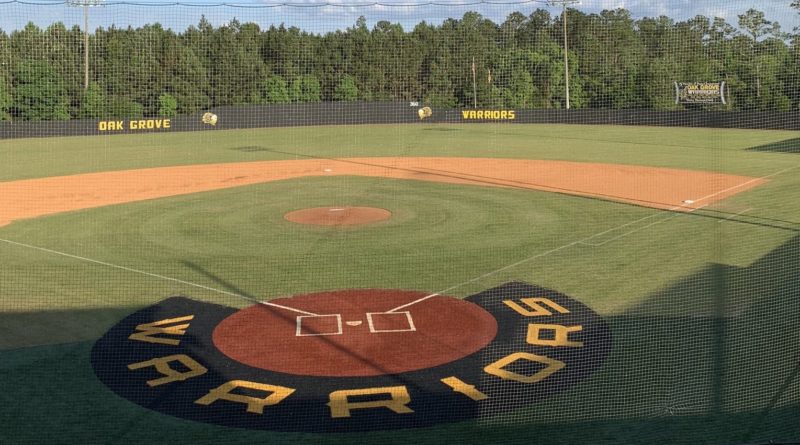 HATTIESBURG – One of the hallmarks of Oak Grove baseball throughout its storied history has been the ability to come up big in do-or-die moments.

The Warriors faced such a moment Wednesday night in the semifinal round of the Class 6A playoffs against fifth-ranked Northwest Rankin.

Needing to win to extend its season, Oak Grove came through again, defeating the Cougars 5-3 at Harry Breland Field. The series goes back to Rankin County for a deciding third game on Thursday.

“We just hang in there and just play it one at a time,” said Oak Grove coach Chris McCardle. “I’m so proud of my kids. They fight. We’ve just got to find a way to win one on the road.

“We didn’t play with any energy yesterday, and a lot of it had to do with their guy was just so good on the mound, similar to what J.P. gave us tonight.”

In Tuesday’s 4-0 decision at Flowood, junior Nick Monistere silenced the Warriors on just three hits. But Wednesday it was Oak Grove (24-7) that got the big effort on the mound, from senior right-hander J.P. Lyon, who outdueled senior Blake Summerlin for Northwest Rankin (26-7).

“He was spot-on tonight,” said McCardle. “When he gets zoned in and has all his stuff working, he’s tough. When you get to this point in the season, South State – and we’ve been here so many times – you’ve got to have some dogs out there, and he did the job for us.”

Lyon (7-1), who is headed to Pearl River Community College this fall, went the distance. He gave up four hits, struck out nine and walked three. His only mistake was a big one, a three-run home run to Monistere in the fifth, but otherwise he was flawless.

“I had my off-speed and my fastball working,” said Lyon. “It worked out for me. My curveball was really working well. I was able to get some 12-6 motion with it

Defense was a big factor behind Lyon. The Warriors did not make an error and their positioning was superb throughout.

“I thought we hit the ball well at times, but just hit it right at them,” said Northwest Rankin coach K.K. Aldridge. “I just told them, tomorrow they’ll hit it and we’ll catch it; they’ll throw strikes, we’ll hit it, and we’ll see what happens.”

The Cougars got two runners on with one out in the top of the first, when Monistere singled and Summerlin walked. But Lyon got a strikeout and catcher Caleb Gibson threw out Monistere trying to steal third base for the final out of the inning.

“It’s important that we not have any errors,” said Lyon. “We just have really good team chemistry when we get it going.”

Oak Grove immediately responded by manufacturing a run in the bottom of the inning to grab the lead.

Senior Peyton Peoples led off by legging out an infield single on a slow roller to shortstop. He stole second and was balked to third, putting him in position with one out to score on a sacrifice fly by Zach Little.

“Being a leadoff hitter in the order, I know I need to do whatever I can to get on base, help my team and pass my bat on to the next guy,” said Peoples, who signed with Northeast Mississippi Community College on Monday, alongside teammate G.W. Pigott, who signed with Mississippi Delta.

“I don’t try to do too much, just find a way to get on base. I know if can get on, we’ve got guys behind me who can get me in. We were aggressive on the basepaths tonight, and I think that was a recipe for success. That was just good coaching.”

It was the same scenario in the third, when the Warriors took command with a four-run rally that proved decisive.

Peoples starting things again with a one-out single into leftfield. The Warriors loaded the bases when senior Foster Mitchell and Little drew back-to-back walks, and all three runners scored when Jack Sikes’ single got past the leftfielder and rolled all the way to the fence.

Junior McKinley Gieger followed with an RBI single to give Oak Grove all the runs it would need.

Summerlin (4-2) regained his focus to finish the game for the Cougars, and he got off the hook in the bottom of the fifth with a pair of flyouts, when a hit batter and a double by junior Ethan Easterling put runners at second and third with one out.

“I think he fell behind to a couple of batters and got into some predictable fastball counts,” said Aldridge. “And when he got in those situations, they put some real good swings on the ball and were able to capitalize.”

Northwest Rankin made it a game in the top of the fifth scoring all three of its runs on one swing of the bat.

With one out, Lyon surrendered a walk, then got a strikeout, but Luke Lycette beat out a bunt single in front of home plate and Monistere followed by sending a 1-0 pitch deep over the leftfield fence.

But Lyon ended the inning with a strikeout then set down the Cougars in order in the sixth and seventh innings to nail down the victory.

“This is a scrappy team; we’ve got a lot of fight,” said Peoples. “This is one of the hardest-working teams I’ve ever been on. To be a part of this is something I just can’t explain.”

For Northwest Rankin, it was the Cougars’ first loss in the playoffs and snapped a 13-game winning streak dating back to April 8.

“We’ll be fine,” said Aldridge. “We’ll come out and compete tomorrow. We had a long streak going earlier this season, got beat by Brandon in region play, then got on another hot streak. It’s baseball. You tip your hat to their guy.”

The winner in Thursday’s winner-take-all contest will face Madison Central in the Class 6A state championship series beginning next Wednesday at Trustmark Park in Pearl.

“With Game 3, anything can happen,” said McCardle. “I feel good about it.”