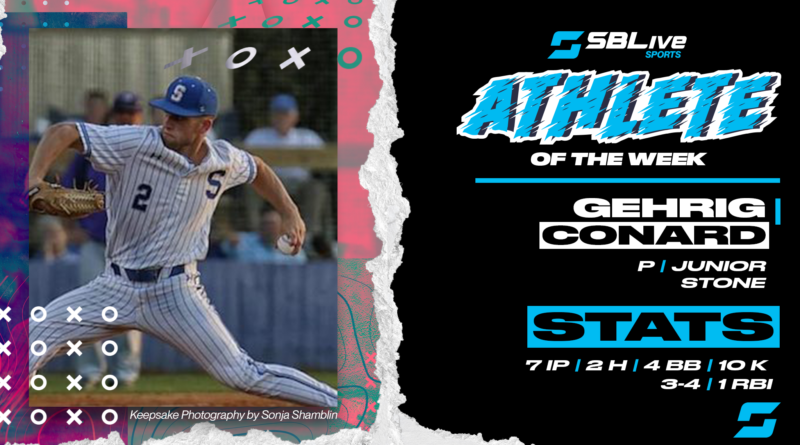 Congratulations to Stone junior Gehrig Conard for being voted SBLive’s Mississippi High School Baseball Player of the Week for May 10-16!

In one of the more heroic performances we’ve seen this season, Conard put aside the grief over his father’s death and hurled a gem to give the Tomcats a 5-0 series-opening win over Purvis. He went seven innings and gave up two hits and four walks with 10 strikeouts. He also went 3-for-4 at the plate with an RBI.

Conard received 53.21% of the vote, beating out Resurrection’s Cole Tingle, who finished second with 12.49%. Lafayette’s Blake Loper finished third with 11.44% and Stringer’s Nic Arender finished fourth with 10.24%. There were over 19,000 votes tallied this week!

Nic Arender, Stringer: Went 1-for-3 at the plate with a run scored and pitched 6.2 inning without giving up an earned run, giving up five hits and a walk with 10 strikeouts in Stringer’s 9-1 win over Richton in Game 1.

Hunter Elliott, Tupelo: Hurled a gem in a 3-1 series-opening win over DeSoto Central, going seven innings and holding the Jaguars to one unearned run on two hits and a walk with 10 strikeouts in seven innings. He also went 1-for-2 with a couple of walks, a triple, one RBI and a run scored in Saturday’s 9-1, series-clinching win.

Blake Loper, Lafayette: Pitched Lafayette past Ridgeland in opening game in the third-round matchup. Loper went the distance in a 10-1 win, allowing one earned run on five hits and one walk with three strikeouts. He also went 3-for-4 at the plate in Game Two with two RBIs.

Nick Monistere, Northwest Rankin: Held D’Iberville to one unearned run in Thursday’s 12-1, series-opening win. He went five inning sand gave up just three hits and two walks with 11 strikeouts. He also played a key role in a 6-4 win in Game Two, going 2-for-4 at the plate with a double, one RBI and one run scored.

Connor Nation, Madison Central: Went a combined 5-for-10 with three doubles, a home run, seven RBIs and three runs scored in a three-game series win over Starkville. Also pitched two innings, striking out six of the seven batters he faced.

Marshall Phillips, Sumrall: Went 5-for-9 with three walks, a double, two home runs, four RBIs and four runs scored in a three-game series win over North Pike. His second homer of the day Saturday clinched the 4-3 walk-off win and sent the Bobcats to the 4A South State Finals.

Cole Tingle, Resurrection: Worked 6.2 innings to pitch the Eagles past Ethel 6-4 in the series-opener in Pascagoula Friday night. He gave up four unearned runs on eight hits with a walk and struck out 12.

Cole Tolbert, West Jones: Worked seven innings without giving up a run in West Jones’ 4-3 series-opening win over East Central Thursday night. None of East Central’s three runs were earned, and Tolbert gave up just three hits and two walks with 10 strikeouts. He also singled and scored a run, then walked twice and scored another run in a 9-2 win in Game Two Friday night.