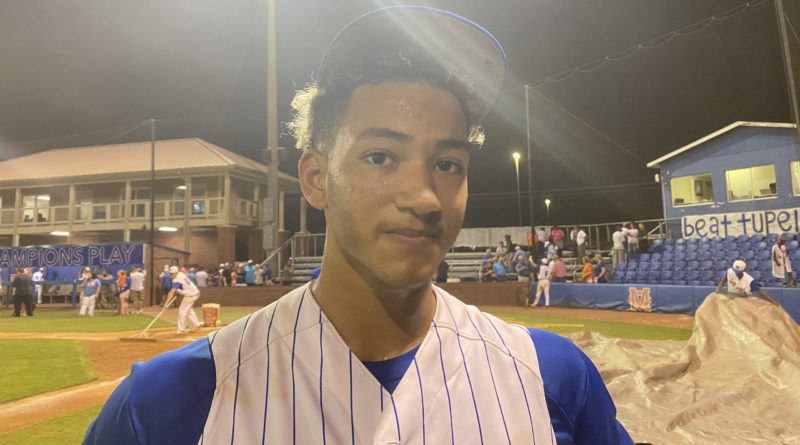 MADISON — Monday’s 6A North State Finals series opener between top-ranked Madison Central and Tupelo was billed as a heavyweight showdown between two dominant pitchers, and nobody in the the standing-room-only crowd went home disappointed.

Game Two is set for Tuesday night in Tupelo.

Montgomery was phenomenal — the senior went all seven innings and allowed just two hits, struck out 12 hitters and homered.

“I struggled with control a little early,” Montgomery said. “But I started locating my curveball a little bit better as the game went on. My defense was playing great behind me, and that gave me the confidence to challenge hitters.”

And challenge them he did — Montgomery threw 70 of his 119 pitches for strikes, issued just two walks and beaned two batters.

He ran into trouble just once. It came with one out in the second inning after Mason Morris doubled off the wall in left-center, Will Hodges drew a walk and Lake Reed got hit by a pitch.

“Thought we had a great chance to score there,” Tupelo coach Justin Reed said. “We just struggled to lay off the high fastball all night, and we did in that situation, too. We had some good at-bats against him, and I thought we barreled up some balls, but you just have to tip your cap to him.”

Montgomery got better as the game went on — he retired 10 of the last 11 batters he faced, including two strikeouts in the seventh inning.

Elliott was nearly as good for Tupelo (27-9). The senior left-hander pitched all six innings for the Golden Wave, allowing seven hits and one walk with 10 strikeouts.

He pitched around seven of the nine baserunners he allowed, but the other two were killers. Connor Nations hit a towering homer to right field in the second inning, and Montgomery’s blast in the sixth was a no-doubter over the left-center wall.

“We did a lot of work preparing for (Elliott) over the weekend,” Nation said. “Coach (Tyler) Poole had the pitching machine set up to something crazy like 110 miles-per-hour and up in the zone, so when we got out there tonight, it made it look easy.”

Nation said he was sitting on the fastball and hoping to get something he could elevate.

If Tupelo wins, Game Three would be Wednesday night in Madison. But Jaguar coach Patrick Robey said he’s hoping to avoid that scenario.

“I’m hoping this was our seniors’ last game at home, but what a ball game if it was,” Robey said. “Just a great atmosphere for a baseball game tonight. We had tremendous support from our fans, now it’s on us to go up there and finish it.”