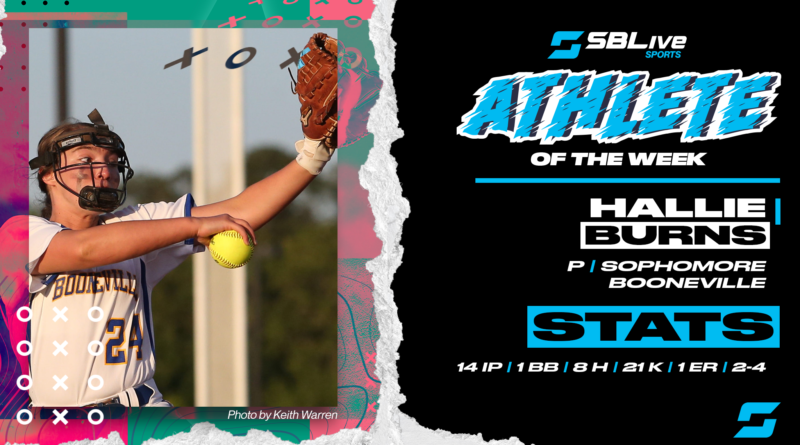 Congratulations to Booneville sophomore Hallie Burns for being voted SBLive’s Mississippi High School Softball Player of the Week for May 10-16!

The sophomore pitched all 14 innings of Booneville’s two-game series sweep over Raleigh. She won Game One 1-0, allowing one hit and one walk with 14 strikeouts. She gave up seven hits in Game Two, but held Raleigh to one earned run with seven strikeouts and went 2-for-4 at the plate.

Burns ran away with this week’s honor, receiving 60.65% of the total vote. There were over 63,000 votes tallied this week!

Julia Shaw, Hernando: Pitched 16.2 innings over three games for Hernando, earned two wins and allowing just 1 run on 12 hits with eight strikeouts and six walks. She also went 2-for-3 at the plate in the decisive third game, driving in one run.

KC Schuler, Kosciusko: Went 5-for-10 in the three-game series win over North Pike, with six total RBIs, two runs scored, a double and a grand slam.

Caylie Streich, Myrtle: Pitched all 14 innings of Myrtle’s two-game sweep over Stringer in the 1A Championship series. She gave up just one earned run on 12 hits and three walks with 14 strikeouts. She also drove in three runs in Thursday’s 7-1 series-clinching win.

Elleigh Willis, Neshoba Central: Pitched all 12 innings of Neshoba Central’s two-game sweep of East Central in the 5A Championship series. She gave up one earned run on nine hits and two walks with four strikeouts. She also went 5-for-7 at the plate in the series with three RBIs.