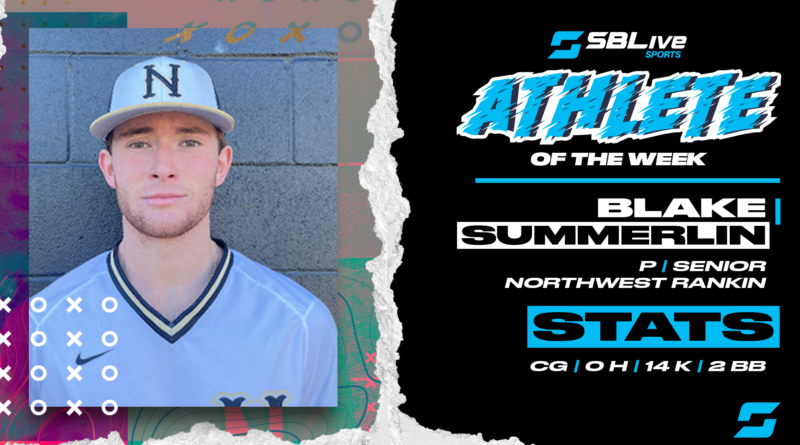 Congratulations to Northwest Rankin senior Blake Summerlin for being voted SBLive’s Mississippi High School Baseball Player of the Week for May 3-9!

Summerlin received 55.07% of the vote, beating out Ridgeland’s Montravious Winn, who finished second with 20.82%. West Marion’s Miles Maliden finished third with 18.55% and Ripley’s Ty Long finished fourth with 3.14%. There were over 68,000 votes tallied this week!

Here are the other athletes who were nominated for May 3-9:

Hunter Elliott, Tupelo: Pitched six innings without giving up an earned run in Tupelo’s 5-2 win over Oxford Thursday night, allowing four hits and one walk with 11 strikeouts. He also drove in a run.

Ross Highfill, Madison Central: Went 4-for-4 with a double and six RBIs in Madison Central’s 26-5 win over South Panola Thursday night, then hit a three-run homer in an 11-0 win Friday.

Bradley Loftin, DeSoto Central: Went the distance in the Jaguars’ 5-0 win over Germantown Friday night, allowing three hits and one walk and striking out 12 batters.

Montravious Winn, Ridgeland: Pitched a complete-game no-hitter against Cleveland Central in a 1-0 win in Game One of the 5A North second-round series, walking three batters and striking out seven. He also picked up the game-winning RBI in Game Three with a bases-loaded walk in the eighth inning.