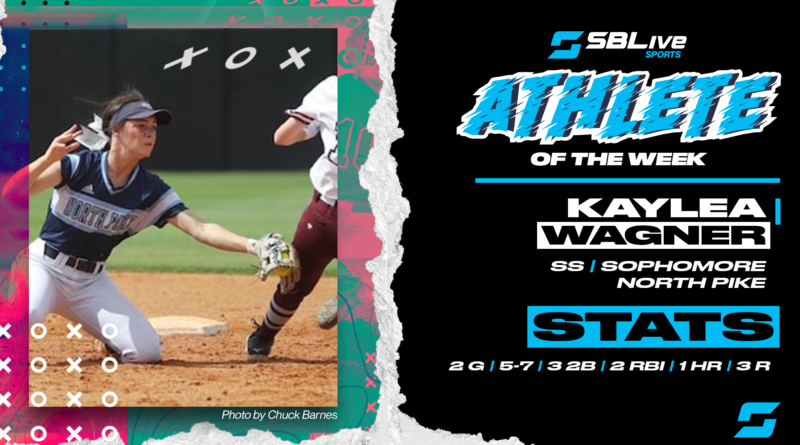 Congratulations to North Pike sophomore Kaylea Wagner for being voted SBLive’s Mississippi High School Softball Player of the Week for May 3-9!

The sophomore went 5-for-7 at the plate over two games in the Jaguars’ series against Vancleave. She went 2-for-2 with two doubles and a pair of RBIs in Game One, then went 3-for-4 with a double, a homer and three runs scored in a 10-2 win in Game Two.

Wagner received 43.87% of the vote, beating out Myrtle’s Olivia Decanter who finished second with 31.45%. Booneville’s Hallie Burns finished third with 11.14% and Myrtle’s Caylie Streich finished fourth with 8.22%. There were over 34,000 votes tallied this week!

Here are the other athletes who were nominated for May 3-9:

Hallie Burns, Booneville: Allowed just one run in 14 innings of work in the circle in back-to-back wins over Kossuth. She gave up seven total hits, issued one walk and struck out 16 batters. She also singled in a run in Thursday’s 7-1 win.

Jaclyn Carter, Hernando: Went 2-for-4, stole a base and scored twice in Thursday night’s 10-0 win over DeSoto Central, then went 4-for-5 with a double, two RBIs and a run scored in Friday’s 8-4 win.

Holly Craft, Raleigh: Went 2-for-2 with a double, a homer and two walks for three RBIs in Thursday’s 7-4 win over Morton, then walked three more times in Saturday’s 4-2 win. She also pitched all 14 innings in the series, striking out 25 of the 55 batters she faced without giving up an earned run.

Olivia Decanter, Myrtle: Went 4-for-4 with a double and four RBIs and scored twice in Thursday night’s 7-0 win over Hamilton. She also drove in a run in Friday night’s 6-0 win.

Madilyn Graham, Stringer: Pitched all 14 innings of the Red Devils’ series win over Sebastopol. She got the shutout in Game One, allowing four hits and issuing three walks with five strikeouts. She gave up two earned runs on six hits and five walks in Game Two.

Ramsey Montgomery, Mantachie: Pitched all 14 innings of Mantachie’s two-game series sweep of East Union without giving up a run. She struck out 20 of the 53 batters she faced, allowing seven hits and two walks. She also went 3-for-7 at the plate with two doubles and a pair of RBIs.

Caylie Streich, Myrtle: Pitched all 14 innings of Myrtle’s two-game sweep of Hamilton without giving up a run. She struck out 21 of the 53 batters she faced, and only allowed seven hits and issued two walks.