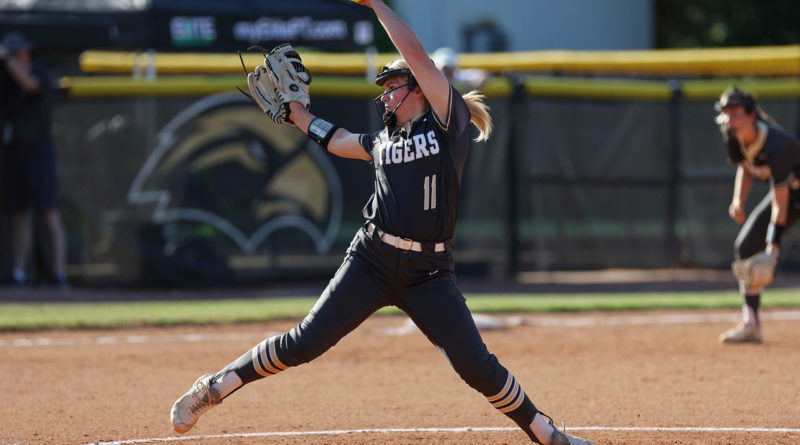 HATTIESBURG — When Hernando senior Emme Muizers was a freshman, she wrote a letter to herself that she didn’t open until the end of her senior season.

In that letter, she asked her future self if she had helped the Lady Tigers win a softball state championship.

After Saturday, the answer is yes.

Muizers and the rest of the Lady Tigers lifted the MHSAA 6A State Championship Trophy at the Southern Miss Softball Complex after defeating South State Champion Oak Grove 4-0 in a winner-take-all Game Three.

It was the first softball championship in school history.

“This means everything to us,” Muizers said. “We have a great team with great chemistry, and its really special to do this as a senior and know that these younger players have a great chance to get back here and win another one.”

Hernando (34-3) got a huge boost from starting pitcher Julia Shaw, who was also the Game One winner. She held Oak Grove scoreless for seven innings Saturday, allowing just two hits and two walks with four strikeouts.

She also drove in a run on two hits in three trips to the plate.

“Everything was working for me today,” Shaw said. “I just tried to keep them off-balance and the defense played great behind me all day.”

Hernando picked up the only run they needed in the first inning when Rilee Eyster reached on an error and came around to score on Jaclyn Carter’s RBI single through the left side of the infield.

They picked up another on Shaws’ RBI single in the sixth inning, and plated two more in the seventh on a two-run single from Muizers.

“I was just looking for a hit in that situation,” Muizers said. “We were already ahead and looking for some insurance runs. I’m a power hitter, but in that spot I was just trying to put in play somewhere and it found a hole.”

Shaw sent Oak Grove down in order in the bottom of the seventh to seal the win. The Lady Warriors (24-7) never advanced a runner into scoring position after the first inning.

Oak Grove was seeking its first softball championship since 2013.

“We just didn’t get the bats going at all today,” Oak Grove coach Benjy Hornsby said. “I think we only had two hits in the game from the same player, and it doesn’t matter how many runs they score if we can’t score any.”

Those two hits came from Benjy Hornsby’s daughter and star player, Ryanne Hornsby, who started all three games and pitched all 21 innings of the series for the Lady Warriors.

“She’s a great pitcher,” Hernando coach Nicki Whitten said. “She has good velocity and she spins it well. But those first three series in this playoff run really prepared us for these games down here and got us ready to face a pitcher like her.”