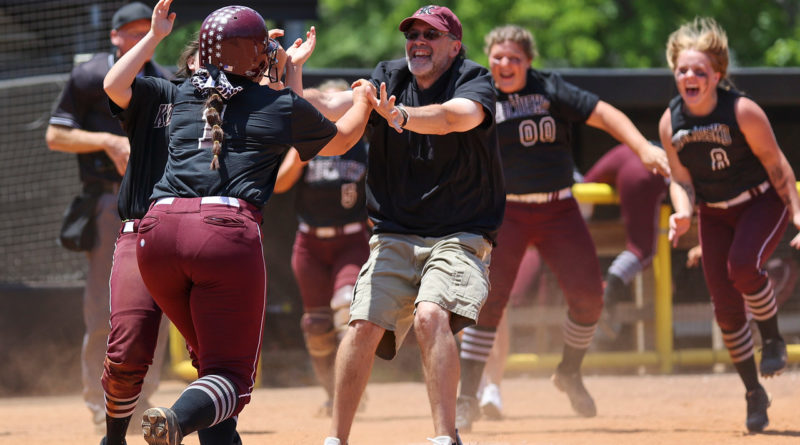 HATTIESBURG — The Lady Whippets were down, but they weren’t out.

It made for one of the more remarkable comeback stories in all of Mississippi sports this year, and made for a fitting end to this strange 2021 season.

“These girls just never quit, and that’s why you can never count them out,” Kosciusko coach Tony Terry said, still grinning ear-to-ear and cradling the state championship trophy. “We had already fought back from being down five in the seventh, so we had confidence we could do it again in the eighth.”

And so they did.

The Lady Whippets (28-10) went into the bottom of the seventh inning down 6-1, but got off to a quick start on singles from senior Emma Rush and sophomore Alexandra West.

Rush came around to score on a fielder’s choice ground ball off the bat of Campbell Blaine, and Mary Kimble Price followed with a single to bring West home and cut the North Pike lead to 6-3.

Kathryn Schuler struck out for the first out of the inning, but Makynlee Dickerson singled on a ground ball past the second baseman to score Hood from third, and Gracie Williams followed with another single to score Blaine and cut the deficit to 6-5.

North Pike got the lead runner at the plate on Maicee Coleman’s grounder to third for the second out, but a throwing error by North Pike shortstop Kaylea Wagner allowed Dickerson to score the tying run.

North Pike (24-13) stormed back with three runs in the top of the eighth. Natalie Deer laid down a perfect sacrifice bunt to score Sydney Williams from third, and Emelie Williams crushed a two-run homer over the wall in right-center.

“All I asked of our girls was to give it everything they had and leave it all on the field,” North Pike coach Sonya Wallace said. “You saw the way they fought. I couldn’t have asked them for any more.”

Unfortunately for the Lady Jaguars, Kosciusko had one more big inning up its sleeve.

Hood reached via a hit-by-pitch to lead things off in the bottom of the eighth, and Blaine crushed a line-drive double past Wagner at short to plate one run. Price followed with a sacrifice fly to deep right field to cut the North Pike lead to 9-8.

The tying run came home two batters later, when Dickerson singled through the left side to bring Blaine home and advance Schuler, who represented the winning run, to second base.

It was Gracie Williams who brought home the winning run with a line drive single over the shortstop’s head and sent the Kosciusko crowd to a fever-pitch.

“I wasn’t trying to do too much thinking,” Williams said through tears of joy. “I was just trying to remember to have fun, swing the bat and put it in play somewhere. It’s going to take a while to come down from this.”

Nor should it — these Lady Whippets came back to win two games from South State Champion North Pike after losing Game One 9-5. They pounded out a remarkable 41 hits in three games in the series.

Fourteen of those hits came Saturday. Williams and Blaine both tallied three hits to lead the Lady Whippets. Price was credited with the win in relief. She went four innings and allowed three runs on three hits — all in the top of the eighth — and struck out two North Pike hitters.

Saturday’s remarkable come-from-behind win had shades of 2018, when this same Kosciusko program erased a 7-0 deficit in the seventh inning of a state championship game and came back to win 9-7 in nine innings.

“I told the girls we weren’t out of it, and they truly believed it,” Terry said. “They never got down and they never dropped their heads. Every time we got hit, they seemed to get more determined. I couldn’t be prouder of the girls.”